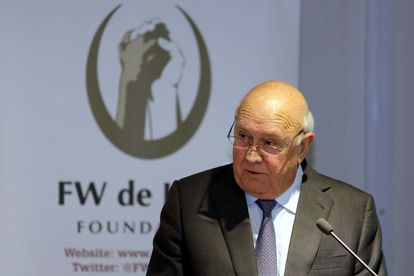 This might be a tough sell for FW de Klerk, who today published a Heritage Day message through his foundation. In the letter issued on Friday, the last president of the apartheid era openly mused about how the culture of white South Africans is perceived by the masses, referring to a controversial court verdict from five years ago.

Fixating on a judgment that encouraged the further renaming of streets and locations of interest in Tshwane, de Klerk feels that some of the words used in 2016 have had a negative impact on South Africa. Indeed, FWDK objected to one of the judges who suggested that white history in the country ‘is rooted in oppression’.

This is certainly a difficult topic to address, especially on a day like today. Various colonial rules, swiftly followed by almost 50 years of an apartheid government, have left South Africa with a very traumatic history. De Klerk, who was a long-serving member of the National Party, won a Nobel Peace Prize for helping to bring democracy to South Africa.

However, his long-running association with apartheid means that many citizens won’t forgive or forget. In recent history, FW de Klerk has been a lightning rod for outrage, with appearances at SONA and comments about his old regime provoking angry responses from the general public.

“I have looked at the Constitutional Court’s deeply disturbing 2016 judgment in City of Tshwane Metropolitan Municipality v AfriForum, which dealt with the renaming of streets in Pretoria. It went much further than the renaming of streets, and appeared to question the right of white South Africans to culture.”

“The judgment had very disturbing implications. Did it mean that the history of white South Africans was nothing but a one-dimensional litany of oppression? Was there nothing since 1652 that was worthy of commemoration and celebration?”

“More seriously, what did the judgment mean for the foundational right of white South Africans to human dignity – with which their cultural and historical identities were inextricably linked? These are questions that all South Africans should consider very carefully on Heritage Day.”