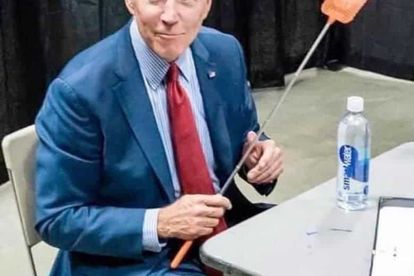 US presidential election campaigns always create a bit of a buzz around the world.

But last week Americans were really buzzing when a fly landed on the neatly coiffured hair of Republican Vice-Presidential candidate, Mike Pence, as he debated his Democratic opponent, Kamala Harris, live on television.

The fly lingered, clearly enjoying its moment in the limelight, and American voters began speculating whether the substance of the debate was such that flies were always going to gather round.

Soon social media was abuzz and the Democratic campaign – led by Presidential candidate Joe Biden – was quick to realise that this was an opportunity that shouldn’t be swatted away.

Within two hours of the Great FlyGate Debate, as it will undoubtedly be known for years to come, the Biden team had begun selling a line of commemorative flyswatters bearing the phrase ‘Truth Over Flies. Biden-Harris’.

Their marketing campaign was backed by the slogan ‘Don’t let this debate buzz off’.

Biden also took to Twitter and tweeted a photo of himself with a very large flyswatter in hand, plus the line: ‘Pitch in to help this campaign fly’.

Americans loved the idea and the swatters began to … fly … off the shelves. Just a few hours after making the item available, a remarkable 35 000 had been sold and stocks ran out.

“We saw the internet and our supporters sharing a viral moment online, so our digital team came together on the fly,” Zach McNamara, the Merchandise Director for the Biden campaign, said in a media statement.

“The goal was to show that Joe Biden and Kamala Harris will always choose truth over lies, science over fiction and unity over division.”

Other entrepreneurs have also seen the opportunity and are producing shirts with slogans such as ‘Fly will vote’. There’s even a face mask that features a photo of Mike Pence with the fly on his head.

Is there any truth in the rumour that the Biden campaign is now … flying high?