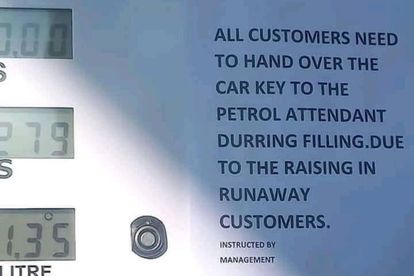 Petrol stations in SA may institute new rules in order to curb the rise in fuel theft. Photo: @AquakhuOnBase / Flickr

Petrol stations in SA may institute new rules in order to curb the rise in fuel theft. Photo: @AquakhuOnBase / Flickr

Petrol stations have become targets for many who are filling their tanks up and driving off. This has prompted a few stations to put up notices requesting payment before petrol/diesel is put into a vehicle.

Some petrol stations are making changes to avoid fuel theft

Some stations have even asked for car keys to be handed to the petrol attendant so payment can be confirmed. One petrol station had a notice that spoke about an increase in incidents of fraud and drive-offs.

IOL reported on a Glenwood, Durban, petrol station. This station has a sign informing motorists that payment may be asked before tanks are filled. The station had reportedly been robbed a few times.

An admin worker at the station shared that four people had driven off with full tanks of fuel recently. She shared that the sign is specifically for vehicles without number plates. However, petrol attendants can use their own discretion.

She added that the station has reported these incidents to the SAPS.

Reaction Unit South Africa’s Prem Balram shared that they have attended a number of cases of fuel theft. Balram shared that customers would ask for a full tank, request a payment through a card machine and drive off before paying.

Two successful arrests have been made this year with the help of CCTV footage. The drivers in these cases have been charged with theft of fuel. Balram said that instituting a pay before filling rule could be beneficial.

He explained that this is a common practice overseas. Customers are required to pay first and then only will they receive the fuel.

Fuel price increase: Six ways to save a buck and not overuse petrol

The record-high fuel prices that have reached South Africa are a cause for concern for many motorists. 93 octane petrol increased by 28c a litre and 95 octane petrol by 36c a litre. Diesel also increases between R1.52 a litre and R1.69 a litre.

Fuel price increases are just another financial pressure that will be felt in many local households. A few weeks back, Government encouraged remote working, for those who can, to lessen the impact of the rising fuel costs.