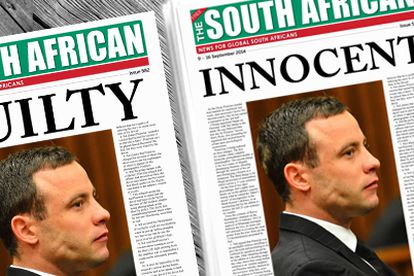 Judge Masipa is known for handing down tough sentences but she has also displayed some compassion towards Oscar Pistorius during his trial, adjourning court on several occasions on account of his emotional state. It is entirely unclear which way she might be swayed with various verdicts available at her discretion.

If Pistorius receives the harshest possible verdict – that of Premeditated Murder – he would automatically have to face a life sentence, which in South Africa means 25 years in prison before becoming eligible for parole. However, premeditation is difficult to establish before court, with previous murder cases having successfully bent the definition to a near-absurd extent. A Premeditated Murder verdict would also likely result in a lengthy appeals process to follow, which Judge Masipa may not want the Blade Runner and his legal team to indulge in at the tax payer’s expense.

The lesser charge of Murder is another possible verdict, which would mean that Pistorius would face 15 years in prison. The finer points of the indictment against him, such as the claim that he thought he was shooting a burglar in self-defence, would consequently be dropped and not become eligible to provide grounds for future appeals in and of themselves. Strategically speaking, this might be a more effective sentence – if Pistorius is indeed found guilty.

Culpable Homicide is also on the table as a potential verdict, and has been the favoured option among some analysts. Under this sentence, Judge Masipa would be allowed to use her own discretion for choosing both the length of the jail term and also for its nature, possibly stretching to liberties as far-reaching as opting for house arrest (for at least part of the sentence). Oscar Pistorius could even avoid jail time altogether if the circumstances of the crime were deemed as sufficiently mitigating factors. Taking his unique celebrity status into consideration, this verdict might allow for the flexibility that some believe the case deserves.

As with all court cases, there is also the option of a Not Guilty verdict being reached – although the evidence against Pistorius may not appear to point in that direction. However, even if Pistorius was acquitted of the deliberate murder of Reeva Steenkamp he could still face several years of prison time for the three counts of firearms charges brought against him; in one of those counts Pistorius has admitted his guilt. If found guilty of the various firearms charges, Pistorius could face a total of 15 years in prison, with each count carrying a maximum sentence of five years.

One of the earliest clarifications made with regards to a potential prison sentence given to Pistorius was the fact that he would be allowed to keep his prosthetic limbs if he is indeed sent to a correctional facility. Early reports had stated that he would only be entitled to a wheelchair.

Even beyond this consideration Pistorius would remain a special case on account of his celebrity, which Judge Masipa is likely to bear in mind when delivering her verdict.

Experts say that Pistorius is likely to suffer disproportionately if he is kept in with the general prison population at all times. Criminologist Laurie Pieters said in an interview that any person with a disability entering a prison would likely be targeted by gangs. Adding his celebrity status to the equation, Oscar Pistorius might even face greater threats, such as being extorted for money.

South Africa’s prison population is the highest in all of Africa and the entire correctional system is beleaguered with issues relating to overcrowding and violence, which is unlikely to allow someone like Pistorius to fit in. With SA prisons being a far cry from the level of luxury that the Olympian athlete is accustomed to it would be a difficult adjustment for Pistorius no matter how the details of the verdict turn out.

Traditionally, murder convicts in South Africa are sent to prison facilities within the province that they are tried in. However, with the Pistorius trial being a special case and attracting such public attention, the Blade Runner may end up in any of the four corners of the country. But with security measures subsequently having to meet a high standard, there are but a few facilities that might qualify.

Although it has a reputation of being a rough place the C MAX wing of the Pretoria Central Prison features security measures that would ensure Pistorius’ safety as much as possible. Eugene de Kock, the notorious henchman of the minority government convicted of crimes against humanity, is housed under a high level of precautionary measure at the facility. However, some of those safeguards are only made possible by keeping inmates like de Kock in solidary confinement for the majority of their days, with some reports stating that there is only one hour of recreation time per day outside prison cells. The Pretoria facility would, however, be in line with the practice of sending convicted felons to a prison within their trial province if Oscar Pistorius is to be found guilty.

This correctional facility has become well-known for housing two of the “Waterkloof Four”,  who were convicted of killing a homeless man in 2001 while they were still teenagers. Acknowledged for making their prison sentences run fairly smoothly, Zonderwater would be another likely candidate for Pistorius if he is found guilty, keeping him still within the reach of Pretoria. Deemed a medium-security facility, Pistorius might enjoy some better company than at the infamous C MAX prison in Pretoria.

Having housed Nelson Mandela during his final 14 months of arrest, the Drakenstein Correctional Facility arose to international fame on the day that he was released. Madiba had enjoyed a great deal more freedom at Drakenstein (which was then known as Victor Verster Prison) than he had during his previous days spent at Robben Island and later at Pollsmoor prison. With a track record of being able to house high profile cases safely and away from the limelight, Drakenstein might be another good option – especially if the sentence delivered allows for Judge Masipa to use some level of discretion.

If Judge Masipa had an axe to grind with Oscar Pistorius she might send him to Pollsmoor. Other than its maximum security status it is not a likely location for the athlete to end up at if he is found guilty, but other high profile cases have in the past been referred to the Cape Town facility even from outside the Western Cape. Known as the most notorious correctional facility in the country it would certainly give any prospective inmate plenty to fear, as gangsterism is rife throughout the various wings of the prison. However, the prison may soon close its doors, as it has been reported that the land it is located on might be up for sale.

The 13 incongruities of Oscar Pistorius’s defence