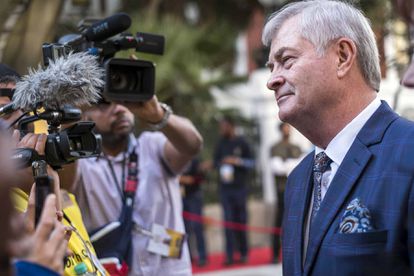 Freedom Front Plus (FF Plus) leader Pieter Groenewald has said that he will rather err on the side of caution and get himself tested for COVID-19 after he came into contact with African Christian Democratic Party (ACDP) leader Kenneth Meshoe at a religious gathering in Bloemfontein on 10 and 11 March.

President Cyril Ramaphosa was also in attendance at the gathering, and Groenewald said that he had been in close contact with the president.

“In the meeting itself, I was quite a distance from him, but during the photo session with the president, I stood right behind him,” he said.

“I will undergo the test, but on advice from my medical practitioner, he said that we must wait the for 14 days. And now that time has elapsed and therefore I will go for the test and I will inform everybody of its result. I think that I have the responsibility towards my loved ones, – my family and the people towards with whom I had been in contact, to inform them about the results.”

Meshoe and his party’s chief whip, Steve Swart, both tested positive for the virus on Thursday 26 March, and have been in quarantine with their families ever since. They are understood to be in good health.

A church gathering at the Divine Restoration Ministries in Ribblesdale, Bloemfontein, earlier in March was attended by several government leaders and became the centre of a massive tracing effort to track down some 600 congregants after a group of tourists in attendance tested positive for the coronavirus.

Fears have grown that many of these confirmed cases had come into contact with Ramaphosa. However, he has since tested negative for the virus.

“As head of state and chair of the National Command Council (NCC) the president has a rigorous public engagements schedule; and has, during the course of the last few weeks, held numerous meetings with a wide cross-section of people from all walks of life,” said presidential spokesperson Khusela Diko when his results were announced.

“The Presidency has deemed it necessary to make the test results public to reassure the nation that the president is in good health and continues with his duties,” added Diko.