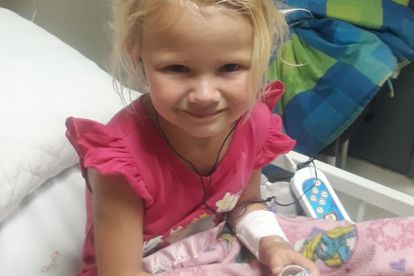 The four-year-old girl who was so severely injured when a pit bull attacked her that chunks of flesh were ripped from her tiny body was expected to undergo intensive surgery on Friday.

According to her mother, Martie Coetze, Amorey is scheduled for intensive surgery on Friday morning.

Martie said this would not have been possible if it had not been for an anonymous angel who offered to cover some of the medical bills for Amorey to be treated in a private hospital.

ANONYMOUS MAN OFFERED TO PAY SOME OF THE MEDICAL BILLS

“We are just so relieved and thankful. No parent ever wants to see their child in so much pain, and we are happy that she is now getting the medical care and attention she needs,” she said.

Martie explained that it had been a battle since Amorey was admitted to a state hospital as the family couldn’t afford medical aid.

“This has been quite a week for us, emotionally and financially.”

She added that Amorey and her siblings, Verushka and Diwan are still traumatised after the vicious attack.

WHAT HAPPENED ON SATURDAY AFTERNOON?

The three siblings were given money to quickly go and buy sweets at the tuck shop down the road on Saturday afternoon, 6 November 2021.

A pit bull stormed and attacked the children who were walking the street. Three children, Amorey, Verushka and Deon were injured in the attack.

“We were busy at home when all of a sudden my son came running up to me, shouting something. I could not hear what he was saying, but I knew something was wrong, and I just started running,” he said.

Coetzee said he found his eldest daughter crying hysterically and screaming, standing in the street with her little sister Amorey in her arms.

“She just kept saying dad the dog bit us. I tried my best, but he bit Amorey and me.”

Coetzee said he could see that Amorey was severely injured as she was bleeding profusely.

“I took off my shirt and tried to cover the visible wounds as I was running home with her in my arms and Verushka with me. Once we reached the house, I gave Amorey to my wife, Martie, and I ran back to check where the dog was as I was scared that it would attack someone else,” he said.

“We found several bits of Amorey flesh on the t-shirt we used to wrap the bleeding wounds,” said a shocked Coetzee.

Coetzee said when he got to the place where the children had been attacked, he found the aggressive dog still there.

WHAT DID THE OWNER OF DOG SAY?

“I found that gate of the house where the pit bull is kept was open. The owner was on the scene. I was furious and kept asking him, how the hell do you leave a gate open with such an aggressive dog.”

The owner of the dog, Innocent Amiko, said he does not understand how this incident happened.

He explained that on the morning of the attack, he left home early. Amiko said he had tied the pit bull to a chain at the house that he shares with other people. When he got back later that afternoon, he was informed that the dog had attacked children including a four-year-old girl.

“I don’t know how the dog managed to get out into the street. Even the chain that I used was gone,” he said.

Amiko confirmed that the pit bull had attacked other children about two months ago in the same street.

He has since handed the dog over to the Roodepoort Krugersdorp SPCA.

According to the SPCA, the pit bull was still very aggressive.

Police confirmed that two cases have been opened and that both dockets were referred for devotion on the prosecution to Senior Public Prosecutor. This means the decision will be taken whether or not to institute criminal proceedings against an accused person.

The brave four-year-old girl was severely injured in the attack. See the images below. Please note it is graphic.