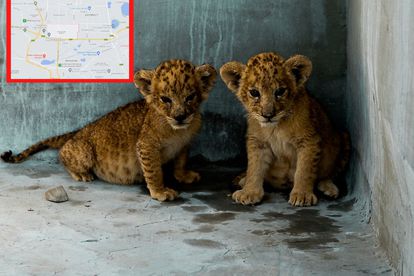 Four women in custody for possession of lion cubs they were selling Photos: Stock/GoogleMaps

Four women in custody for possession of lion cubs they were selling Photos: Stock/GoogleMaps

Four women are in custody for possessing lion cubs they were selling in Boksburg North.

THE FOUR WOMEN WERE IN POSSESSION OF THREE LION CUBS

According to police spokesperson Captain Lloyd Ramovha, the four women appeared in the Boksburg Magistrate’s Court on Wednesday for possession of three lion cubs that they were selling.

“The Hawks‘ Serious Organised Crime investigation arose after a tipoff from Crime Intelligence was swiftly acted upon on Monday.

“Following surveillance, a search and seizure operation netted four women in Boksburg North. Three lion cubs estimated to be around five weeks old were rescued from them.”

THE WOMEN FACE THE THESE CHARGES

Ramovha furthermore said this is a contravention of the National Environmental Management Biodiversity Act.

They appeared in the Boksburg Magistrate’s Court, and the case was postponed to Tuesday, 06 November 2022, for a bail application.

Earlier this year, a horrifying video circulated on social media. A lion bit off a man’s finger who was petting him through the fence of an enclosure at a zoo, with everyone speculating whether it happened in South Africa.

THE HORRIFYING MOMENT IS CAUGHT ON CAMERA

This is because the man is heard screaming the well know and loved South African swearword – F@k! several times in the video.

The man puts his hand inside the lion’s enclosure, reportedly in an effort to put on a show for visitors.