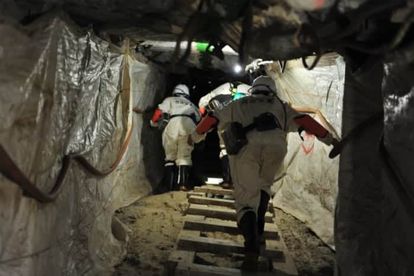 Ex-miners who contracted TB or Silicosis can now submit their claims to the Department of Health. Photo: File

Ex-miners who contracted TB or Silicosis can now submit their claims to the Department of Health. Photo: File

Four miners have died at the Harmony Gold’s Kusasalethu mine near Carletonville in Gauteng.

The incident happened on Saturday, 7 May 2022 after a mud wall collapsed while the four miners were cleaning an underground mud dam.

Harmony Gold which is South Africa’s biggest gold mining company said the death was due to infrastructure maintenance-related issues.

the families and relevant authorities were immediately informed and the affected area has been closed, pending an in-loco investigation.

Harmony Gold CEO, Peter Steenkamp said they are deeply saddened by the incident.

“At Harmony, we view our employees as part of the larger family. Our priority is now to support the families of the deceased and everyone affected by this tragedy,”  Steenkamp said.

The company’s share price reportedly plummeted after the death of the four miners were reported.

COMPANY’S HISTORY OF ACCIDENTS IN MINES

In March 2022, a miner working in Harmony Gold’s Doornkop mine in Johannesburg lost their life after a mine-related material car incident.

In October last year, two miners were fatally injured following a seismic event resulting in a fall of ground at its Kusasalethu mine.

In 2014, an underground fire at the Harmony Gold’s Doornkop mine in Johannesburg claimed the lives of nine miners while eight others were rescued by emergency services. Power lines and water pipes were damaged during an earthquake, trapping 17 miners more than a mile underground on Tuesday evening.

In unrelated accidents at two other mines also owned by Harmony Gold (one in the Free State and the other in the North West Province), two further miners died putting further strain and attention on the company. The mining conglomerate had momentarily halt operations amid all the search and rescue efforts to review its safety procedures.