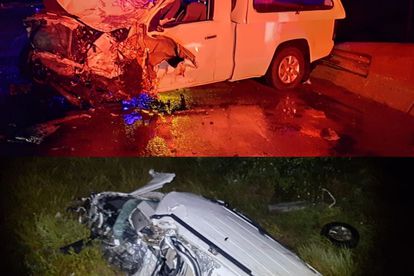 Four people were left dead and ten others injuried in separate vehicle accidents in Polokwane over the weekend.

Three people died and seven were injured in a collision between a Fortuner and a bakkie on the N1, in the Bylsteel area, north of Polokwane.

The accident took place on Saturday.

ER24 spokesperson, Ross Campbell said paramedics arrived on the scene to find that five patients from the bakkie had already been transported with minor injuries by another EMS to hospital.

“The driver from the bakkie was still on-scene but declined transportation.

“Six patients from the Fortuner, which was found off the side of the road, were still on-scene,”

One female and one male, both believed to be between the ages of 40 and 50, were found on the ground behind the vehicle.

They showed no signs of life and were declared dead on arrival by ER24.

Another female around the same age was found entrapped in the Fortuner in a critical condition.

Provincial Rescue were busy with her extraction when she unfortunately succumbed to her injuries. She was also declared dead by ER24.

A three-year-old toddler was also found in a serious condition and treated and transported to the Polokwane Provincial Hospital by another private service on scene.

“A 29-year-old man suffered serious injuries and required Advanced Life Support interventions to stabilise his condition before being transported the same hospital for further care by ER24.”

The Fire Department, Provincial Rescue and EMS as well as SAPS were all on scene.

Meanwhile, on Friday a woman in her 30s died and three others suffered serious to critical injuries in a single-vehicle rollover in the ZZ2 area, north of Polokwane.

ER24 paramedics arrived at the scene at 21:25 to find the occupants outside the vehicle.

A woman in her 30s succumbed to her injuries and declared dead on arrival.

Another 33-year-old woman was found in a critical condition and was treated using Advanced Life Support interventions before being transported by ER24 to Polokwane Provincial Hospital for further care.

“Two other patients were found in a serious condition and were treated and transported by another Emergency Medical Service on the scene,”

The driver of the vehicle declined transportation to hospital.

Police were on the scene for further investigation.