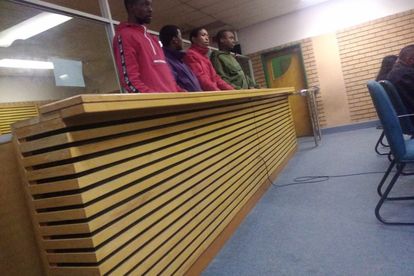 Four suspects allegedly behind the shooting at a tavern in Pietermaritzburg remain in custody after appearing in court on Monday. PHOTO: Facebook/Smindlo Lo Ophushayo

Four suspects allegedly behind the shooting at a tavern in Pietermaritzburg remain in custody after appearing in court on Monday. PHOTO: Facebook/Smindlo Lo Ophushayo

The police established a team to trace down suspects behind the shooting at Samkelisiwe Tavern.

On Saturday, 9 July, a group of gunmen entered the tavern and opened fire on the patrons. The gunmen then fled, leaving four people dead. Eight others were wounded. The gunmen allegedly arrived in a VW Polo, which police had managed to track down shortly after the incident.

But the shootings immediately prompted KwaZulu-Natal police commissioner Lieutenant General Nhlanhla Mkhwanazi to mobilise resources. He put together resources to track down and bring those behind the shooting to book.

The team arrested four suspects between Monday and Tuesday. The suspects are aged between 19 and 36 years.

They were arrested in the area of Nhlazatshe in Pietermaritzburg, said Gwala.

“Two of the suspects were found in unlawful possession of a firearm with a total of 17 rounds of ammunition.”.

The four suspects appeared before the courts on Tuesday. They remain in police custody as the matter is postponed to 28 July for a formal bail application.

Mkhwanazi commended the team for the breakthrough made in the deadly shooting. He applauded and welcomed the arrest of the suspects.

“I have commended the team and applauded them for tirelessly ensuring that those responsible for this massacre are brought to book,” said Mkhwanazi.