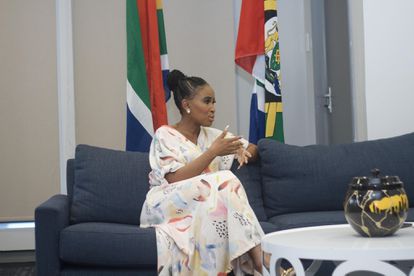 Former Joburg Mayor Dr Mpho Phalatse will be making her way to the police station to open a case against the ANC tomorrow, Wednesday, 12 October.

This after Phalatse accused the ANC and the Johannesburg Property Company (JPC) of performing a transaction worth millions of rands.

“Tomorrow, Wednesday 12 October 2022, we will be laying criminal charges of corruption with the South African Police Service (SAPS) against the ANC and the Johannesburg Property Company over a transaction worth millions of rands. #HandsOffJoburg”.

Phalatse was recently ousted as Joburg Mayor following a vote of no confidence. Phalatse and the party she represents (the DA) have claimed the ANC seized power unlawfully and vowed to fight for the City via the judicial system and public participation, including a petition.

TRANSACTION AMOUNT YET TO BE KNOWN

The former Joburg Mayor has not disclosed the exact amount of the transaction performed by the ANC and Johannesburg Property Company. Anyhow it could be that the fine details of her case will be presented at the police station where the criminal charges will be laid.

“I’ve said before, and I still maintain, that a court victory alone will not see the city restored to a trusted government. There is a political battle to be fought too. A battle to appeal to the senses of political parties who genuinely care about our city and its residents,” said Phalatse when she created a petition seeking signatures to support her battle to save the City of Johannesburg from the ANC.

“We as the DA will focus our attention on regaining the City of Johannesburg and stop the ANC and their unlawful coalition partners from looting the city a second time and again paying no heed to the needs of the residents,” she previously stated.