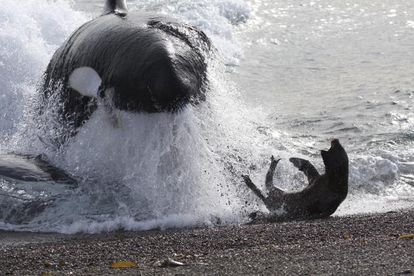 PATAGONIA, ARGENTINA – UNDATED: ***EXCLUSIVE*** Mel, the Killer Whale or Orca narrowly misses out on a seal that it was hunting in Patagonia. As 2010 fast approaches these images show spectacular animals who this year captured animal lovers’ hearts and minds across the globe. From a super-rare battle of the beasts between angry hippos and […]

PATAGONIA, ARGENTINA – UNDATED: ***EXCLUSIVE*** Mel, the Killer Whale or Orca narrowly misses out on a seal that it was hunting in Patagonia. As 2010 fast approaches these images show spectacular animals who this year captured animal lovers’ hearts and minds across the globe. From a super-rare battle of the beasts between angry hippos and […]

Remember the movie Free Willy and how it made you think how cute killer whales are? Well, they’re not. They’re total bastards.

The clue should be in the name “KILLER”, but the thing is, they are not actually whales. They are dolphins. It is thought that they used to be called “whale killers” and somewhere along the line, things got switched around. But did you know that? They kill whales.

While they are far from the cute and cuddly things Free Willy had you believe, they are evil geniuses and incredible predators.

They are sometimes called “the wolves of the sea” because of their hunting techniques – which will spare no prey and sometimes even take the piss with the prey because they’re such giant assholes.

You would think that being from the dolphin family, dolphins wouldn’t be on their menu… but guess what? They are.

Why? Because they are Kim Kardashian derriere sized assholes. Killer whales like to eat baby things. ALL THE BABY THINGS. And they get damn creative about it.  Baby seals. Baby sea lions. Even baby sperm whales. But the killer whales don’t stop there. They also eat penguins and sea turtles.

Killer whales like to hunt in packs and they do so to cause a wave that washes animals just chilling out on some ice off their little ice islands.

When the killer whales could simply chomp the poor little dude they’ve decided to munch, they don’t even do that. In their gigantic assholery, they do it again and again, scaring the shit out of their prey. Only when it falls off do they eat it.

But they don’t always torture their prey, sometimes they just go for it. Imagine having a nice chilled day on the beach with your fam and then suddenly you get chomped. Well, if you’re a baby sea lion, that’s EXACTLY what a killer whale will do to you.

Killer whales are also known for killing sharks. What’s interesting about killer whales is that each pod lives differently.

Some are not complete assholes, some are even passive. But when they are of the horrible variety they can be really nasty.

They separated it from its mom, suffocated it and let it die. They just wanted to make sure they know whose turf they were on.

Whatever you do… DO NOT TRUST THESE THINGS.