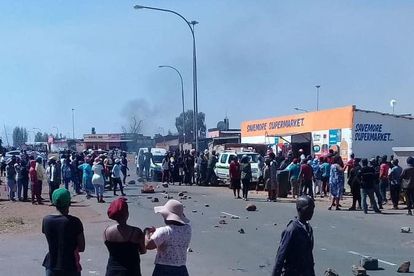 Times Live reported that the owner of the spaza shop was accused of killing a local teen. This, apparently, is the reason why the residents have responded angrily by looting the shop.

In videos and photos shared on social media, the streets of White City, a township on the outskirts of Johannesburg, were littered with rocks and angry community members.

Many of those involved in the looting made it off with cases of drink, flour, nappies and other products.

What was the cause of the looting in White City?

Armed police have since stepped in to restore order in the area. eNCA reporter, Lindokuhle Xulu, was on the scene detailing how things were tense in the standoff between the foreign shop owners and the community.

In the video, foreigners are seen packing whatever is left of their stock in a truck, preparing to vacate the area in one piece.

One of the community members was heard saying

“we will loot! He killed an innocent child.”

According to the residents, earlier on Wednesday, the shop owner, reacting to the attempted robbery of his store, had shot and killed a boy who was not involved in the incident.

In one image shared on Twitter, you can see, at a distance, hat appears to be a lifeless body covered by a fleece blanket.

Tensions run high as police monitor the situation at a distance

None of the shop owners have been keen on addressing the issue. In the above video, you can see the anxiety and the cries of the community members who, according to Xulu, had even tried to loot the truck with the owners’ goods.

However, the owners allegedly released a gunshot in the air as a warning, in the presence of the police, who are monitoring the situation at a distance.