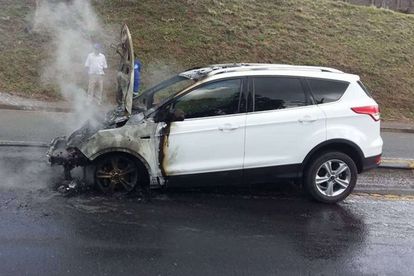 Ford Motor Company South Africa (Ford) has agreed to compensate 53 drivers of its Kuga SUV that caught fire due to a mechanical malfunction between 2014 and 2017, with R50 000.

According to the National Consumer Commission (NCC), 47 out of the 53 owners opted to receive the compensation from the motor giant.

Three of the claims decided to continue pursuing legal action while three more consumers’ claims were rejected as they could not prove that their loss fell within the parameters of the settlement agreement.

In March, the NCC said consumers had been given option, namely:

It was arguably the death of Reshall Jimmy, which placed focus on the fatal consequences of the vehicle’s faults. Jimmy burnt to death in his Kuga, while he was on holiday. Well over 80 other Ford Kugas caught fire in the country, prompting the motor giant to announce a recall of 4 000 vehicles.

Reshall’s sister Renisha said the tragedy ruined their family, particularly their mother who had trouble coming to terms with her son’s death.

Ford has long said it was committed to ensuring that a resolution is reached, for the interests of all affected.

“We remain cooperative with the authorities to help all parties reach a resolution, including the start of a formal inquest to gain closure on the many unanswered questions surrounding this case. Customers can be assured that our commitment remains on delivering safe vehicles,” the company has once said.

Acting Commissioner at NCC Thezi Mabuza has extended her appreciation to the affected consumers for their cooperation and their patience during this process. She has also extends her thanks to the Ford representatives and to the mediator, Adv Motau SC, for his professionalism in painstakingly going through each matter and providing guidance as to the resolve.