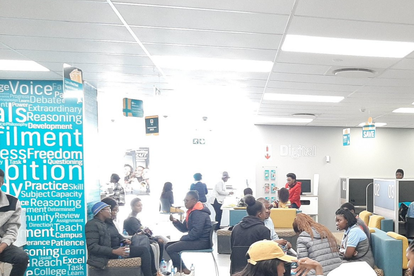 Four alleged criminals will spend the night in custody rather than celebrating a robbery success. Lenasia police have arrested two suspects that were busy trying to execute a bank robbery at a branch on Monday 18 October.

According to the report, the four suspects raided the bank to demand cash while waving guns at the branch staff. A quick-thinking customer alerted cops that a robbery was underway.

A couple of gunfire exchanges took place before two suspects ended up cuffed in the police vehicle.

“It is alleged that four men entered the bank and demanded money at gunpoint. One of the customers managed to notify the police who promptly responded to the incident. Upon arrival at the scene, a shoot-out ensued between police and the suspects.”

One likely eye-witness went on social media to share her shock: ” Bank robbery in FNB Lenasia,” said @ZinyMgolombane on Twitter.

In addition to the flop robbery and successful arrests, the suspects failed to snatch any money. Though two of the four suspects managed an escape, one of the arrested two was left bloodied.

“No money was taken and two suspects were arrested, one of them suffered a gunshot wound while the other two managed to flee the scene. Four firearms were also recovered at the scene.

“The Provincial Commissioner in Gauteng, Lieutenant General Elias Mawela commended the members for their swift response that intercepted the robbery. He further appreciated the community members who continue to report criminal activities,” Sello concluded.

In other recent Lenasia news, police salvaged 50 kidnapped Ethiopian nationals from a house on Friday 14 October.