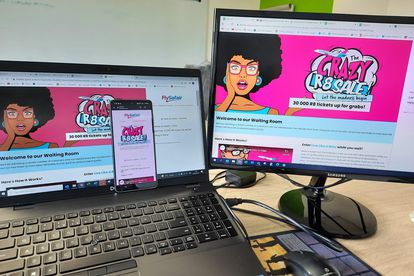 Mzansi are doing the most to get through the FlySafair R8 ticket waiting room that has been compared to Home Affairs. Photo: Twitter/@Seraah_Mading

Mzansi are doing the most to get through the FlySafair R8 ticket waiting room that has been compared to Home Affairs. Photo: Twitter/@Seraah_Mading

Mzansi knows the painstaking waits and despair of having to visit Home Affairs branches. Those feelings are now being dwarfed compared to the wait to get their R8 FlySafair tickets on Wednesday.

The domestic airline is hosting another one of its wildly popular sales from 09:00 to 17:00 on Wednesday. Although, some are concerned about meeting the deadline as the wait to buy tickets is described as worse than at Home Affairs.

Malusi Mkhohlwa encapsulated the experience rather aptly by calling the waiting room a virtual Home Affairs.

Wesley Fester gave up the hopes of getting an R8 ticket and shared his feelings of despair to dissuade others from following him in the folly of entering the virtual Home Affairs.

CHEAP FLIGHTS BUT WHAT ABOUT ACCOMMODATION?

The lucky few who have successfully managed to secure their R8 FlySafair tickets are rejoicing and planning their trips across the country.

Twitter user Dominique celebrated conquering the Home Affairs like line but not just for herself but also her friends.

Although some have begun to plummet from their high of conquering the waiting room and are realising they now need to budget for accommodation.

Many memes have surfaced on social media about the newfound dilemma of getting their R8 flights, in the common comedic fashion, the country handles issues on Twitter.