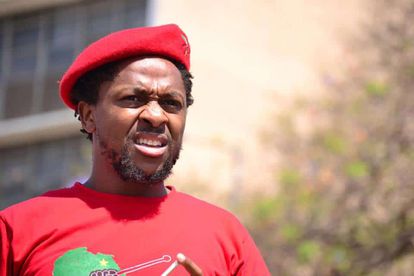 For eight years, “The People’s Bae” as he is fondly known, has dished out memorable quotes and statements on behalf of the EFF.

While some of his utterances have been branded controversial and scandalous, he has managed to keep the public entertained through his creative delivery which has spawned rap lyrics and infamous descriptions, such as “sleepist”.

While the country and the world were celebrating the Springboks victory at the 2019 Rugby World Cup in Japan, Ndlozi saw fit to put a damper on the festivities.

He slammed the Bokke as a symbol of oppression and incurred public outcry for his divisive comments.

“The EFF has long called for the total decolonisation of our public symbols. This underlies our inability to join in the fake celebration of the Springboks. The Springbok is a sign that cannot be white-washed. It stands in parallel with Die Stem and white supremacy in our society,” he said.

Minister Maite Nkoana-Mashabane had the unfortunate luck of being seen taking a nap by Ndlozi. He immediately called her out –  in front of everyone at parly and while the cameras were rolling.

“Honourable deputy speaker…I’m worried that this minister that we pay so much, she is sleeping in parliament and with that position she is going to fall. She is still sleeping! I don’t know what’s happening? The minister is still sleeping, are you condoning people sleeping now?” he sarcastically said.

When former minister of finance Malusi Gigaba served notice on his position and quit, Ndlozi was there to remind him of how lacklustre his contribution supposedly was.

“Malusi Gigaba had been a Gupta stooge who was the engine of state capture under Jacob Zuma. He ensured that the Guptas attain citizenship in South Africa, aiding them to qualify for deals with state-owned enterprises. Throughout his tenure as minister, Malusi Gigaba has been a shame, corrupt and unpatriotic.”

Ndlozi is quoted saying: “We are self-made‚ he just bought it affiliated. We built it ground up‚ and you got it renovated and still killed it.” He lifted this part of his speech from US rapper Rick Ross who said in his lyrics: “Self-made you just affiliate/I build the ground up/you bought it renovated.”

In a scathing speech, Ndlozi took aim at President Cyril Ramaphosa’s involvement in the Marikana massacre and blasted his status as a wealthy businessman.

“Let us begin with the honourable Cyril Ramaphosa who is said to be responsible for moral regeneration. Having started your career in the student Christian movement you would know that it is much more difficult for a rich man to enter the kingdom of righteousness than it is for a camel to walk through the eye of a needle.

“You are the last one to talk about sharing the wealth when your own wealth is based upon the cheap and easily disposable labour of black mineworkers who were killed in Marikana.”