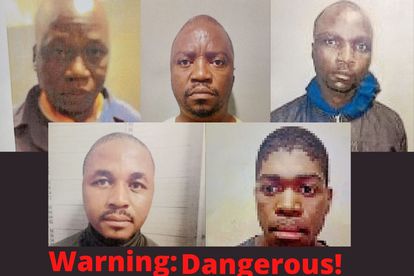 Five DANGEROUS inmates have escaped after they overpowered a police officer and took the cell key from the officer. Have you seen the five men?

DO NOT ENGAGE – THEY ARE PRESUMED TO BE DANGEROUS

Mokgwabone said none of the escapees had been re-arrested, and members of the community are urged not to attempt to re-arrest the escapees in case they see them but to call the nearest police station, as they (escapees) are presumed to be dangerous.

WHAT TO DO IF YOU SPOT THEM:

Alternatively, the Investigating Officer, Captain Basimane Molefe can be contacted on 076 510 8285. Anonymous tip-offs can also be communicated via MySAPS App or by calling Crime Stop on 08600 10111.

According to spokesperson Singabakho Nxumalo, the circumstances relating to the escape will be revealed once investigations have been concluded.