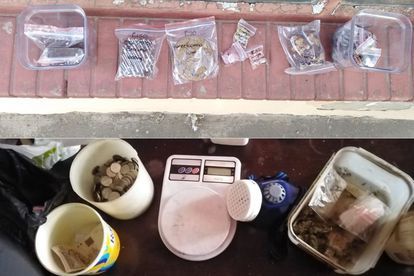 Five suspects were arrested in Bohlokong, Free State, for dealing in dagga.

An intelligence-driven operation resulted in the arrests

The South African Police Service (SAPS) reported that an intelligence-driven operation with the station and district crime combating units resulted in the arrests. Spokesperson for the SAPS in the Free State Warrant Officer Mmako Mophiring said the arrests took place on Friday, 19 August.

Dagga, cookies, candies, cash and other items seized by authorities

The team had previously identified a few houses and searches were conducted. Four suspects were arrested for dealing in dagga while cash and marijuana were seized by authorities.

The items were already packaged at a high street value to customers. The suspect also had large quantities of dagga and cash in their possession. The suspect, a 36-year-old, was apprehended and all exhibits were confiscated.

All five suspects are expected to appear in court soon. The SAPS has since issued a warning to parents to be cautious and warn their children against purchasing cookies and candies laced with drugs.

“The five arrested suspects are expected to appear before the Bethlehem Magistrate’s Court on Monday, 22 August 2022, each to face a charge of dealing in dagga,”

Previously, it was reported that two people were handed a sentence for being found with more than two thousand cannabis plants in their home. The two suspects, Ryan McDermid and Domonique Peres were sentenced to a fine by the Durban Regional Court over a week ago, police said on Sunday, 10 July.

The arrest and sentencing of McDermid and Peres comes after members of the Port Shepstone Serious Organised Crime Investigation unit conducted a search of their premises in January 2018, said spokesperson Captain Simphiwe Mhlongo.

During the search, more than two thousand cannabis plants were confiscated in various premises around the South Coast. The cannabis lab was subsequently and successfully dismantled, said Mhlongo. Read the full story here.