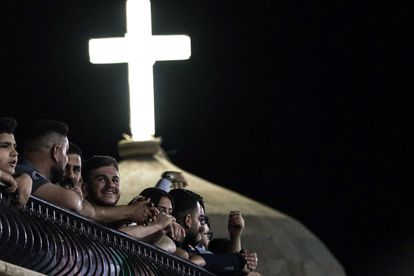 Iraqi Orthodox Christians celebrate Easter Saturday at the church of the ancient Mor Mattai Monastery in the village of Bashiqa, some 30km northeast of the northern Iraqi city of Mosul, during the night of 23 April, 2022. Photo: SAFIN HAMED / AFP

Iraqi Orthodox Christians celebrate Easter Saturday at the church of the ancient Mor Mattai Monastery in the village of Bashiqa, some 30km northeast of the northern Iraqi city of Mosul, during the night of 23 April, 2022. Photo: SAFIN HAMED / AFP

With joyous ululations, thousands of Iraqis have celebrated for the first time the arrival of the “Holy Fire” brought from Christianity’s holiest site in Jerusalem to mark Orthodox Easter.

With chanting and prayers, excited crowds gathered Saturday night to greet the flame’s arrival at the Syriac Christian Orthodox Mar Matta monastery of Saint Matthew, about 28 kilometres (17 miles) from the war-ravaged city of Mosul in northern Iraq.

“It is a message of peace and love for all… a message of resurrection for this bruised country, so that it can regain its strength, its security and its peace,”

The flame was carried from Jerusalem’s Church of the Holy Sepulchre — where Christian tradition says Jesus was crucified, buried and resurrected — in a special lantern to Jordan and then flown to Iraq.

“For the first time in the history of Iraq we managed, through coordination with the Iraqi central government, to transport the holy fire (to Iraq) through Amman,”

According to believers, the fire descends from heaven on the eve of Easter, and is a symbol of Christ’s Resurrection.

To calls of “hallelujah” and the clanging of cymbals, the lantern arrived carried by a bishop into the church at the monastery.

“The dream has come true”

The hashtag was shared widely by Christian Iraqis online.

Celebrating crowds packed the courtyard and monastery church, where worshippers, monks and priests leaned forward to kiss the lantern and receive the blessing they believe the fire grants them.

The crowds then lit candles from the flickering flame, filling the church with light.

The region is home to one of the world’s oldest Christian communities, but believers were hit hard under the onslaught of the Islamic State group (IS), who forced hundreds of thousands of Christians to flee.

Nineveh province, surrounding Mosul, was left in ruins after three years of jihadist occupation which ended in 2017 when an Iraqi force backed by US-led coalition air strikes pushed them out.

Iraq’s Christian population has shrunk to fewer than 400 000 from around 1.5 million before the US-led invasion of 2003 that toppled dictator Saddam Hussein.

But monasteries and churches are being slowly restored, and Pope Francis made a historic visit to the region last year.

“What I feel is the best emotion in the whole universe”,

said one of the faithful, a housewife in her 50s who gave her name as Ferial.