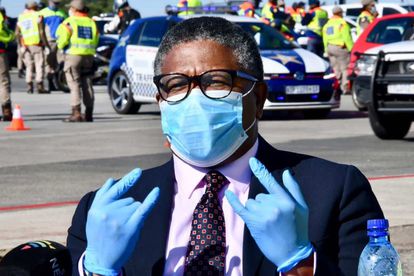 Mbuyiseni Ndlozi isn’t afraid to post a divisive comment or two on his Twitter page, but the prominent EFF member even found himself earning the plaudits of AfriForum on Wednesday, following his diatribe against Fikile Mbalula.

The Transport Minister was seen out and about in Alexandra township, in Gauteng. The full impact of riots and looting in this part of the province has been devastating, and the gutting of a community radio station left Mbalula miffed.

Alex FM has been stripped naked. Community radios are important in connecting people and fulfillment of the important right to access information. pic.twitter.com/zIc99OyCqW

However, Ndlozi wasn’t having this so-called ‘act of cowardice’, and accused Mbaks of only showing up in public once SANDF soldiers had established themselves on the ground. The Red Beret continued to rage, and slammed the minister for his alleged ‘opportunism’ earlier in the day.

“Now that the military is there, you, Fikile Mbalula, appear on the ground, true to your cowardice, hiding behind the skirt of soldiers. When it mattered the most, when the fire was blazing, you were nowhere to be found but here on Twitter. Tell no lies, soldiers restored order, NOT YOU.” | Tweet from Mbuyiseni Ndlozi

As per usual, Mbuyiseni Ndlozi divides the timeline…

Ndlozi’s outburst seemed to split Twitter into two camps. There were those who agreed with his sentiments entirely, including Ian Cameron, a one-time senior member of AfriForum, but a number of social media users were also very quick to point out that the firebrand politician might be contradicting his own stance on the riots.

Ok this one is admitting that soldiers restored order

But this one again he was against the deployment of soldier I really don't understand this guy..🙆🙆 https://t.co/VUwYvXNrWi