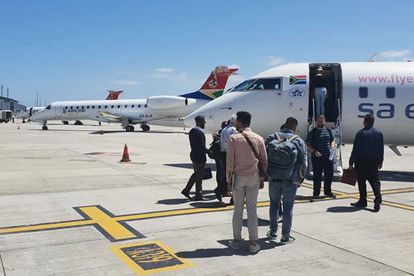 The Freedom Front Plus has urged the Ministry of Public Enterprises to reconsider his efforts of trying to save the sinking ship that is SA Express.

This comes after reports from the Free Market Foundation accused the state-owned airline of receiving a bailout totalling R300-million, that went unnoticed because of the hype around Eskom.

Did SA Express get a bailout?

While this was not corroborated by Minister Pravin Gordhan’s office or the National Treasury, the FF Plus claims that the underhanded R300-million SA Express allegedly received brings the total of bailouts received by the SOE in the past year to R1.54-billion.

In its statement, the FF Plus claims that the FMF has seen financial statements that prove this.

“It seems that the Free Market Foundation forced SA Express by means of the Promotion of Access to Information Act to disclose its financial statements and managerial account data,” FF Plus chairperson, Advocate Anton Alberts noted.

In the FMF report, it is stated that:

Furthermore, according to the FMF’s Executive Director, Leon Louw, every purchase of a SA Express ticket is “money wasted on the poor, who do not fly, subsidising the rich, who do fly.”

“Every person who flies SAX must look down as they fly over conspicuously poor settlements and reconcile their conscience with the implications of their ticket. Every time you are at an airport and see a SAX plane take off, think about the subsidy that you are paying to enable rich people to fly while tax-payers are fleeced and the poor are denied services, housing and welfare. It is immoral and obnoxious,” Louw said.

The FF Plus, who have concurred with the FMF’s findings, warned that if the government continues to tow a lifeline to ailing SOEs, then South Africa might become the next Venezuela.

“The lifeline to SA Express is just another nail in the ANC’s coffin, which will result in the South African economy being turned over to the hands of the IMF to save the country from a Venezuela and Zimbabwe outcome,” Alberts said.