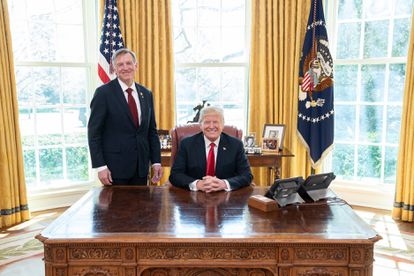 Given the often-heard phrase that “When America sneezes the world catches a cold”, it’s unsurprising that there has been widespread global reaction to the news the US President Donald Trump and First Lady Melania have tested positive for COVID-19.

While many around the world – including national leaders – have sent messages of support, there have also been numerous less than charitable reactions.

The world’s financial markets, which are already jittery over the impact of the novel coronavirus on the world economy and concerns about the impending US election, reacted negatively, as expected.

Among the world leaders who sent messages of goodwill was UK Prime Minister Boris Johnson, who was himself hospitalised with the virus in March. He sent “best wishes” and hopes for a “speedy recovery” via Twitter.

Russian President Vladimir Putin weighed in with a statement via the Kremlin and the country’s state media, in which he told Trump: “I am confident that your vital energy, high spirits and optimism will help you cope with the dangerous virus.”

Prime Minister Benjamin Netanyahu of Israel, with whom the US President has a close relationship and has helped broker recent Middle East peace deals involving Israel, said he and his wife Sara were thinking of the Trumps and wished “a full and speedy recovery”.

The French, though, were less charitable. Government spokesperson Gabriel Attal noted in a media interview that this was “a sign that the virus spares no one, including those who are the most sceptical about its reality and gravity”.

Radoslaw Sikorski, a former Polish foreign minister, was even harsher. “I suggest that you do not try to treat yourself with bleach,” he tweeted, referring to a previous Trump suggestion that disinfectant could be used to treat the virus.

The Betoota Advocate, an Australian satirical website, noted the dwindling infection rate in that country versus the ongoing widespread infections in the US. “Trump Family Records More Cases Of Community Transmission Than Entire State Of Queensland,” it said in a tongue-in-cheek headline.

Already nervous financial markets around the world fell on the news of Trump’s diagnosis, as did the price of oil.

“The positive test reading adds more uncertainty to investors’ worries, especially about its effect on the November 3 [US] election,” observed the Associated Press.

In South Africa, the Johannesburg Stock Exchange’s positive performance on Thursday was reversed again on Friday as the news broke. The rand was weaker and resource stocks such as BHP, Anglo American and Impala Platinum were all lower.

News agency Bloomberg said the US President’s positive test had spooked the local market and caused SA stocks to fall.