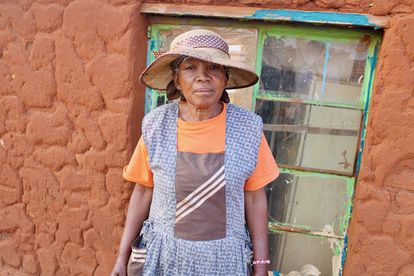 Kedibone Medupi has lived on the farm for 30 years. She farms chickens and has a food garden. Photos: Kimberly Mutandiro.

Kedibone Medupi has lived on the farm for 30 years. She farms chickens and has a food garden. Photos: Kimberly Mutandiro.

By Kimberly Mutandiro on GroundUp

Since its inception, the Brickvale housing project, which has ballooned to cost R1-billion, has been fraught with controversy. The 6 480-unit development is now apparently back on track after years of delays. But about 100 families – of whom 60 have lived on the old Brickvale farm for dozens of years – are refusing to move.

Mayoral spokesperson Phemelo Motoma told GroundUp on Monday that some units would be handed over in December and the project would be finalised in three years.

ALSO READ: Affordable housing plan in Cape Town: Where are we on that?

But Brickvale residents say the new houses are only 40m2, are too close together, the surrounding plots are too small, and the project is unsuitable for their livelihoods.

Many of the residents used to earn a small stipend making bricks. They were allowed to live on the farm for free, in wooden shacks and mud houses. When the farm owner left in 2004 they continued to live there, some seeking work on nearby farms. But in 2014 they were told to leave by a relative of the former owner. They say they were threatened and told their homes would be bulldozed. Some fled to nearby informal settlements. Some were moved to Matshelapad. Others refused to budge.

Why people are refusing to move

Kenny Marope, 87, said he has been living on the farm since February 1962, when he earned R2.50 a month making bricks. It was enough, he says, to buy food and clothes.

Marope’s two children live with him and he has rooms which he rents out to tenants. He keeps chickens and he has a large garden where he rotates various crops – maize, pumpkins and groundnuts.

“What I need is a big plot to accommodate my chickens and garden, not a small RDP house,”

Kedibone Medupi arrived 30 years ago to join her now late husband who was the tractor driver on the farm. She keeps chickens and has a food garden. She also collects empty tins which she sells in Randfontein for recycling. Moving is unthinkable, she says.

“The government should just build me a house where l am, so that I can continue living as before. It was not my husband’s wish for us to be moved because he worked for this land,”

Steven Sithole found work on the farm in 1987. He survives now on recycling and lives with his wife and children.

“This is the only home my family and I have known. It would make no sense if we left,”

Gabriel, whose surname we have withheld, came to the farm from Bulawayo almost 50 years ago – in 1973. His only citizen documentation is a Zimbabwean passport.

“This is my home too and it would break my heart to be evicted,” he said. Like other undocumented immigrants, he is afraid he would not qualify for an RDP house and will be left homeless if he leaves.

The families say they have received no written notices or court orders, but they are being harassed and verbally threatened with eviction. They have turned to Lawyers for Human Rights (LHR) for help.

David Dickinson, of LHR, said that 60 of the 100 families are long-term occupiers with Extension of Security of Tenure Act (ESTA) rights. LHR has written a letter on behalf of the residents to show any municipal official should there be further threats of eviction. It states that all occupiers on Brickvale have the constitutional right not to be evicted nor have their homes demolished without a court order. LHR is willing to facilitate a negotiated agreement.

Mogale City spokesperson Tshegofatso Kotsi said the municipality was not evicting anyone as the land was under the ownership of the Gauteng government, and referred GroundUp to the province to get answers.

But Gauteng Province spokesperson Luzuko Pongoma kicked the ball back to Mogale City saying “all questions about this project should instead be referred to the Mogale City Municipality”.

In 2018, Freedom Front Plus councillors asked questions about the project, in particular why R63-million was paid by the Gauteng Province for a property valued at less than R3-million.

“I’ve asked them so many times why they bought it for so much money. It didn’t make sense,” says Amanda de Lange, former councillor in the area and now a member of the Gauteng provincial legislature.

Freedom Front Plus councillors also raised red flags about the safety of a housing development built on land with a history of mining activity and underlying dolomite, a type of rock prone to sinkholes.

According to a March 2021 Metroplan prepared for the West Rand District and Mogale City Local municipalities, the Brickvale development is “embroiled in controversy”. The report also warns about the dolomitic conditions.

A high-tech video of the development can be seen on the contractor’s site here.

GroundUp asked the company, Temi Construction, to comment on the issue of dolomite a week ago, but we have received none.