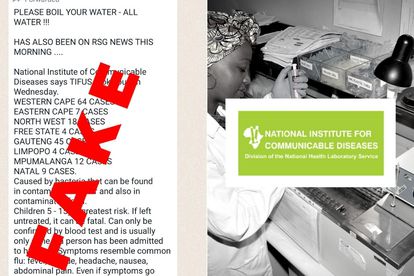 The NICD has rubbished claims of a typhoid fever outbreak that has sent alarm bells across SA. Photo: NICD / Facebook

The NICD has rubbished claims of a typhoid fever outbreak that has sent alarm bells across SA. Photo: NICD / Facebook

The National Institute for Communicable Diseases (NICD) shared a post on Facebook slamming claims of a typhoid fever outbreak. This is after a post regarding the alleged outbreak was widely shared on social media.

The post starts off in an alarming manner, requesting that people boil their water. It then goes on to state that NICD allegedly said there was a “tifus outbreak”. The fake post details the number of ‘cases’ of the disease in each province.

The fake post tries to instil fear into parents

It goes on to describe that bacteria can be found in contaminated water and food. The post raises alarm bells for parents, stating that children between the ages of five and 15 years olds are the ‘biggest risk’.

“Children 5 – 15 years old are the biggest risk. If it is not treated, it can be deadly. It can only be confirmed by blood test and is usually only done if a person is admitted to hospital. Symptoms look like the normal flu: fever, fatigue, headache, nausea, stomach ache. Even if symptoms go away, worms can stay in the stomach and a person can be a carrier.”

NICD rubbishes claims of the outbreak

The NICD shared a screenshot of the post online with ‘Fake News’ written across it. The caption shared alongside it was:

“Please note that this is FAKE NEWS, individuals are requested to stop circulating it immediately!!”

Water supply has been interrupted in several areas in eThekwini due to the recent devastating floods. City teams have been working to repair infrastructure to restore the supply of water. In the interim, water tankers are being dispatched to affected communities.

This is to ensure residents have access to clean, safe water to drink and meet their other needs. Waterborne illness can cause a variety of symptoms including vomiting and diarrhoea; therefore it is important to take the necessary precautions when collecting water.

Collecting freshwater from a reliable source is imperative. Should water be collected from untreated water sources for other uses, there are ways to ensure it is safe. Read the full story here.