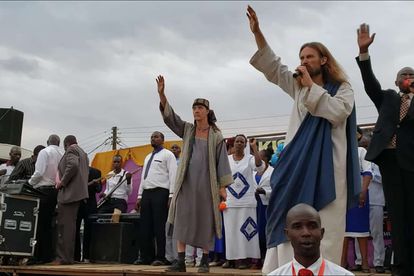 Angry Kenyans and South Africans have lashed out at a man impersonating Jesus who with long blonde hair and wearing a robe was seen on the streets of Kitengela, south of the Kenyan capital Nairobi, dancing to praise and worship songs.

One South African even suggested that the man and the Kenyan pastor who enabled the event both be arrested, according to media reports.

The bizarre incident all began when a Kenyan pastor announced that he had invited “Jesus” to his home church after noticing the man walking in the streets of the Kenyan town last weekend.

No to fake news. This guy never claimed to be Jesus, no church claimed to have invited Jesus. This guy was advertised as Michael Job from USA. He is an actor &an evangelist. He is even there on Facebook asking for prayers for his crusades. The Jesus claims are fake, bye bye. pic.twitter.com/0w2Eq2DAPc

The man took up the invitation and joined the Kenyan congregation which subsequently began dancing and celebrating “Christ’s” arrival. After Sunday’s service ended “Jesus” was subsequently driven along the streets in a convoy of cars waving to onlookers.

While some might have found the event amusing or even believed the impersonation others were left fuming with one critic demanding the fraud be arrested.

Several South Africans slammed the incident, including pastor Sokhulu Mhlongo, who asked what was wrong with religious leaders and questioned whether they were even religious or were just in the profession to make money, the Malawi media reported.

Another South African, Cynthia Dlamini, 84, told the Daily Sun when Jesus comes everyone would see him.

“That’s how his greatness will be. This Jesus they are talking about is just a joke,” she said.

Another Sun reader, Mandy Zulu, called for the arrest of both the fake Jesus and the pastor.

“It is heartbreaking that Jesus was in Africa in the flesh. He even preached on Sunday but nothing changed.”

However, another tweeter Mxo Mabaso was able to see the humorous side of the situation saying he wanted to meet this “Jesus” and ask him for Lotto numbers.