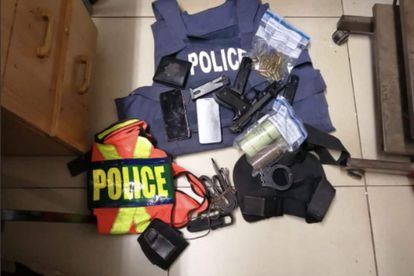 A man by the name of Thomas Magane, 28, who allegedly posed as a fake cop, appeared in the Moutse Magistrate’s Court on Thursday, 16 January 2020.

According to a South African Police Service (SAPS) statement, Magane was arrested on Saturday 28 December 2019 by police in Dennilton in Limpopo, after he was found in possession of police equipment including; a SAPS uniform, a firearm, ammunition, grenades, handcuffs, a bulletproof vest and a reflector jacket.

According to the statement, the suspect was arrested during an operation that was conducted along Loskop and Ntwane Roads next to the Moutse Magistrate’s Court on 28 December 2019.

“The suspect allegedly pretended to be a police officer and tried to evade arrest,” said Mojapelo.

The suspect is facing charges of impersonating a police officer, resisting arrest, unlawful possession of firearm and ammunition, a SAPS bulletproof vest and other items.

Investigations into how he acquired police equipment and uniform are still proceeding.

Magane’s case has been postponed until 23 February 2020, while police investigations continue.

In a statement released on Tuesday 1 October 2019, SAPS revealed that criminals pretending to be police officers were making calls to homes of applicants who were looking to join the police. They would phone up, demand that R2 500 is transferred to an anonymous account, and target either the prospective employee or their parents.

The police have brought more clarity to the application procedure, telling citizens to avoid paying any sum of money in exchange for employment. There is a list of secure, contactable numbers that are provided to all potential workers upon completion of their forms:

“SAPS’ official advertisement for entry-level posts does not provide for payment by an applicant, nor is it responsible for the collection of money or anything in exchange for employment. Both nationally and provincially, SAPS has no policy or instruction regulating the collection of monies for this particular purpose,” said the SA Police Service.

“Any person who claims to have received authority from the SAPS to collect monies from people with a false promise to secure employment for them, such a faceless individual is not from the police and is not representing the department. All official’s contact numbers are indicated in the job advertisements,” it added.