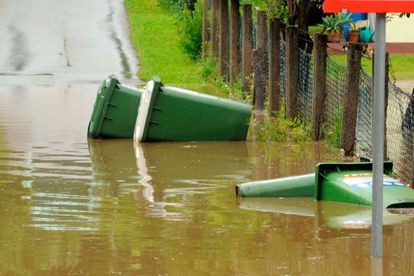 Everything you need to know about the Level 4 weather WARNING issued for KZN Photo:Stock/Canva

Everything you need to know about the Level 4 weather WARNING issued for KZN Photo:Stock/Canva

A level 4 weather WARNING has been issued by the South African Weather Service (SAWS) for disruptive rain in parts of KwaZulu-Natal.

KZN LEVEL 4 WARNING – WHAT YOU CAN EXPECT THIS WEEKEND?

The SAWS warned of roads and bridges flooding as well as poor driving conditions. Flooding of settlements and damage to property and infrastructure is also expected.

“Disruption due to sinkholes, mudslides, rockfalls, and soil erosion is possible. A major disruption of traffic flow is also possible due to roads being closed or flooded.”

The SAWS furthermore urged residents to stay indoors and off the roads if possible.

“Avoid crossing rivers and swollen streams where water is above your ankles.

“If trapped in a vehicle during a flood, abandon it and climb to higher ground.

“In buildings, move valuables to a safe place above the expected flood level. In rural areas, move livestock to higher grounds,” it said.

DISASTER TEAMS ARE ON HIGH ALERT

He said communities residing in low-lying areas could experience flooding due to the already saturated ground following the heavy rains experienced by the province in April.

“Disaster Management teams will continue to work closely with the South African Weather Service to alert communities should the cut-off low-pressure system result in a severe weather warning.”