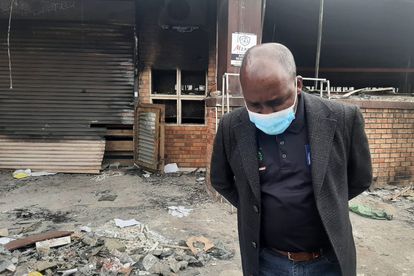 eThekwini Municipality Mayor Mxolisi Kaunda inspects the damage at a shopping centre in the small town of Mamdekazi outside Pinetown on Wednesday. Photograph: Lyse Comins

eThekwini Municipality Mayor Mxolisi Kaunda inspects the damage at a shopping centre in the small town of Mamdekazi outside Pinetown on Wednesday. Photograph: Lyse Comins

The eThekwini municipality said in a statement on Friday that Kaunda had convened a meeting with city leaders and heads of law enforcement agencies to consolidate safety plans.

The news of the mayoral meeting comes after a leaked classified police intelligence document on an SAPS letter head details police concerns about the potential threat of unrest during a planned national pro-Zuma shutdown. The document, titled: “Threat and Risk Assessment: Hotspots Identified for the Possible Shutdown in the eThekwini Outer North Area” indicated that some businesses wold probably beef up security in light of the threat. The document highlighted specific businesses, which may be targeted should unrest break out, and called for “due vigilance” by the police.

“This office reports that posters are circulating for a ‘national shutdown’ by various organisations affiliated to the ANC, MKVA, SANCO, SACP and ANC Youth League. The date is set for 23 August 2021, from 9:00am and they plan to meet at Both’s Park, Durban and will proceed to the ANC provincial office. There are various issues tabled, unverified vaccines, free education, black lives matter. It is reported that the most salient point is that they want President Ramaphosa to resign from his office and also want former President Jacob Zuma to be released from prison,” the document read.

The document raised concerns about possible attacks on specific businesses, national key points, vaccination sites and police stations across the eThekwini Municipality. It also highlighted concerns about businesses being targeted in other parts of the region such as Phoenix, Verulam and Tongaat. The document called for “maximum police presence”.

“The possibility of people using the national shutdown to loot cannot be ruled out. There will be a high level of anxiety among people in the community, due to the unrest period that occurred previously. There is ia high possibility that the community and business owners may prepare themselves for any eventuality by protecting their property and businesses by arming themselves and taking the law into their own hands to protect themselves,” the document read.

A national police spokesperson had not responded to a request for comment at the time of publication.

Kaunda said he was satisfied with the level of planning and called on members of the public to remain calm as police are “on top of the situation”.

“We want to assure the people of eThekwini that all law enforcement agencies are working together to ensure that people’s lives and properties are protected and safe. We have also activated our community crime fighting structures to work with police and share information timeously if they notice any suspicious activity in their communities,” Kaunda said.

He added that Metro Police are maintaining a strong presence in all areas that have been identified as hotspots. “We also want to make a call to members of the public to desist from disseminating information that might cause panic and incite violence,” Kaunda said.