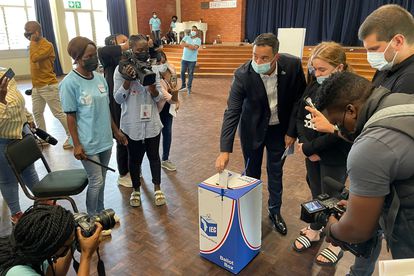 eThekwini Municipality, the home of many major national players on the South African political scene, saw several national leaders heading to the warm city to cast their votes on Monday morning.

DA Federal Leader, John Steenhuisen, cast his vote at the Northwood Boys High School at 9am in Durban North in eThekwini Municipality this morning.

Meanwhile, on the other side of the city, Police Minister Bheki Cele travelled to Lamontville, South of Durban to cast his vote. Cele cast his vote at the Lamontville Council chambers at 09:30, while the Deputy Minister, Cassel Mathale earlier cast his vote 09:00 at the Nkowa Nkowa Community Hall in the Greater Tzaneen Local Municipality in Limpopo.

Several journalists were present at the local voting stations to capture Steenhuisen and Cele casting their votes.

Meanwhile, DA National Spokesperson Siviwe Gwarube said that the party had successfully registered candidates in every ward across all municipalities in the country.

“The DA is riding on a strong momentum to deliver a decisive victory that will put an end to ANC misrule.The DA is the only party with an established track record in government to bring change to municipalities that have essentially collapsed due to ANC corruption and maladministration,” he said.

He said voter interactions had so far indicated that millions of citizens had decided to coming out to vote for change in local government.

“We are calling on all South Africans to make their way to polling stations in which they are registered and make their voices heard. The message to voters is simple, don’t miss your chance to make change,” he said.

He said the party had officers located at every polling station across the country and that they would be on standby to assist voters during the course of the day.

By 9.30am this morning there were already several complaints about some voting stations, including a serious allegation of vote tampering at Amaoti Hall.