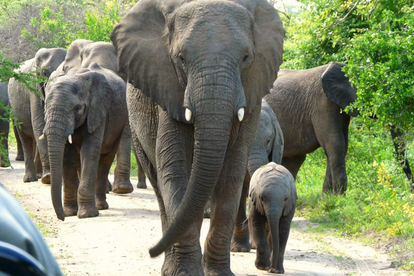 A herd of Kruger National Park elephants on Thursday decided to seek greener pastures OUTSIDE of the perimeter fencing! Image by Flickr

A herd of Kruger National Park elephants on Thursday decided to seek greener pastures OUTSIDE of the perimeter fencing! Image by Flickr

A man is thought to have been trampled to death by elephants at the Kruger National Park on Thursday 21 October. The victim was apparently left behind by his accomplices before his gruesome death.

The suspect’s body was found lifeless in a restricted area of the park known as Stolznek. The location suggests the man was a poacher and therefore killed by the largest land mammals.

The game reserve said the body was found through an anonymous tip-off from a caller who directed the officials to the dead suspect.

“Initial investigations suspect the deceased was killed by an elephant and left behind by his accomplices,” the Kruger National Park’s spokesperson Isaac Phaahla said.

“Nothing was found except that body. We believe he was trampled by elephants due to the nature of the injuries he sustained. We had a similar incident last year where a man, a suspected poacher, was eaten by lions and only his skull was found.”

While no weapons or injured animals were discovered around the area, the Park discovered sound reasons to believe the dead man was a poacher.

The “informant” who anonymously called the facility to trace the body that was trampled by elephants to death is likely to have been at the scene with the dead suspect.

“No animal was killed in the immediate vicinity. Kruger National Park management continues to warn poachers that it is dangerous to hunt illegally in the park. Criminals stand to lose their lives and freedom.

“We have to keep sending these messages as we can’t change a criminal mind,” Phaahla concluded.