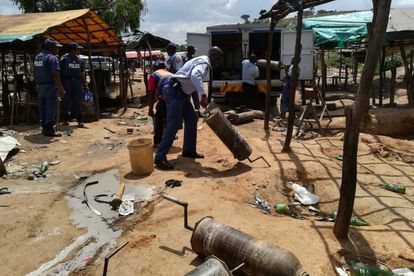 Police on the scene where explosives were found during a raid on illegal mining activities in Benoni. Image supplies

Police on the scene where explosives were found during a raid on illegal mining activities in Benoni. Image supplies

The South African Police Service (SAPS) in Gauteng have continued with their Safer Festive Season operations, this time turning their focus to illegal mining in Benoni, Ekurhuleni.

Several items, including commercial explosives suspected of being used during illegal mining activities, were discovered on Thursday 2 January.

Iron pots, gas bottles and phendukas – homemade steel drums that are spun to separate gold dust from the soil that is dug up in closed mines – were also found.

Members of Germiston police’s bomb disposal – explosives unit who took part in the operation, had to act swiftly to destroy some of the explosives, which were already primed for use.

“The explosives experts found that it would have been too risky to transport the primed explosives as any friction, heat or shock could set them off, exposing people to injuries and/or death”, said police spokesperson Brigadier Mathapelo Peters.

During their Safer Festive Season operations, police also took in 13 foreign nationals to verify their stay in the county while three other people were slapped with fines for operating illegal liquor outlets. The outlets were shut down and the alcohol confiscated.

Police also seized food, bottled water and grocery items which are believed to be provision for illegal miners.

Gauteng provincial police commissioner Lieutenant General Elias Mawela has welcomed the successes emanating from this operation, and assured the public that police will continue to intensify such operations in the strife to decisively deal with illegal mining, which is contributing to serious and violent crime in the province.

The latest crackdown comes a week after the bodies of seven people were discovered dumped next to the N12 westbound highway at the Putfontein off-ramp near Benoni. The victims are believed to have been linked to illegal mining activities in the area.

The police suspect that they were killed underground before their bodies were dumped at the off-ramp where a passer-by later made the gruesome discovery.

“The murders might be related to illegal mining activities in the area. This is not the first incident that we have attended to in and around that area where illegal mining is very rife. But that will only be confirmed once investigations have been conducted,” Ekurhuleni Emergency Services spokesperson William Ntladi said at the time of the discovery.