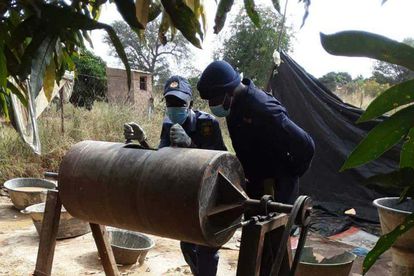 The Directorate for Priority Crimes Investigation (DPCI) has nabbed a total of eight people in connection with illegal mining activities in several villages in Limpopo.

Police believe the suspects, aged between 31 and 65, are part of a group of Zama Zamas in Hlaneki, Mapuve and Mavalani villages, just outside of Giyani on Thursday, 7 May 2020.

The suspects appeared before the Giyani Magistrate’s Court on Friday, 8 May 2020, for contravening the Precious Metal Act 27 of 2005.

Law enforcement, together with various government department and other relevant entities, conducted a series of probes into Zama Zama activities in the area and soon pounced on the suspects.

Items worth millions are seized

A number of items were confiscated by the team including a generator, hose pipes, saws, electric cables, hammers, bags of full gold material,9mm live ammunition, phendukas and other equipment.

“The confiscated goods are yet to be valued but they are expected to run into millions. The suspects were found processing gold when they were apprehended”, Maluleke said.

The province’s DPCI Head Major General Thobeka Jozi has welcomed the successes emanating from the operation and has also assured the public that authorities will continue in their fight to against illegal mining.

There are a reported 30,000 illegal miners who work in and around thousands of abandoned and displaced mines across the country. Often run by criminal syndicates seeking to illegitimately cash in on the country’s minerals sector, Zama Zamas operate under extremely dangerous conditions.

Mining pumps in billions of rands into the local economy, however illegal mining is considered one of the major elements which hamper the sector. In addition to indirect revenue loss, companies also have to spend more money on security.

According to the Minerals Council, the sector contributed R351 billion to the South African gross domestic product (GDP) in 2018. In terms of job numbers, the sector creates close to a million jobs in the country.