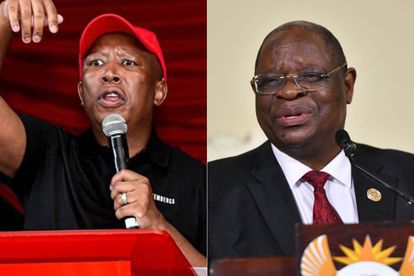 The EFF leader slammed Zondo’s appointment as Chief Justice while speaking at the celebration in Matatiele, Eastern Cape. Malema believes that Deputy Chief Justice Mandisa Maya should have been Chief Justice instead of Zondo.

“The Chief Justice with no brain” – EFF CIC

He touched on how women like Deputy Chief Justice Maya are an inspiration but made sure to speak about Zondo, reports EWN.

“The Chief Justice with no brain, the whole brain that is full of fat on top of that brain, that’s why he can’t think properly,”

Earlier this year, it was reported that proceedings during Acting CJ Raymond Zondo’s interview for the CJposition became rather tense on Friday, 4 February 2022, especially during his interactions with Julius Malema.

Malema made reference to meetings Zondo had with then ANC president Jacob Zuma in 2008. This was in the wake of comments made by Malema, who at the time was a fierce Zuma ally and was President of the ANC Youth League.

The Judicial Service Commission (JSC) posed a series of questions from three other candidates vying for the post. Malema said he was concerned that Zondo might be too involved in politics and questioned whether he brought the judiciary into disrepute when he met with Zuma.

In response, Zondo told Julius Malema that he had reached out to Zuma as a private citizen who was concerned and not in his capacity as a jurist. Zondo says he was worried about possible violence resulting from his remarks. Read the full story here.