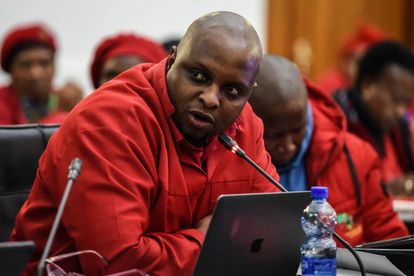 The Deputy President of the Economic Freedom Fighters (EFF), Floyd Shivambu, says the party will take both President Cyril Ramaphosa and Pravin Gordhan to task for undermining the Public Protector’s latest reports.

In a scathing media briefing, Public Protector, Busisiwe Mkhwebane, revealed that Public Enterprises Minister, Pravin Gordhan, had violated the code of ethics and the Constitution of South Africa. This indictment, which holds potentially serious consequences for Gordhan, comes as the latest blow in the public spat between the two combatants.

Mkhwebane’s report into Gordhan’s oversight in granting former SARS deputy commissioner, Ivan Pillay, an early retirement package, with full pension benefits, in 2010, has been the subject of staunch criticism. The Public Protector has, along with her report, issued recommendations for disciplinary action to be taken against Gordhan.

This has been halted by a review application and Ramaphosa’s subsequent unwillingness to proceed with remedial action while the matter is heard before the judicial system. This decision has only added fuel to the fire, further splintering opinion in an already factional African National Congress (ANC), and garnering fierce protestation from political adversaries.

The EFF has been especially critical of Gordhan’s alleged wrongdoings and of Ramaphosa’s inaction. The latter has resulted in a war of words between Gordhan and EFF leader, Julius Malema. Malema and his supporters believe that the Public Protector’s office has been rendered powerless by political subversion.

Similarly, Ramaphosa’s supporters believe that he is being targeted by a politically malicious campaign, spearheaded by central figures implicated in State Capture and those loyal to former president Jacob Zuma. As such, the heated issue has become hyper-politicised on both sides of the fence.

Ramaphosa ‘forced’ to act within 30 days

Mkhwebane, during her latest address, reiterated that her report pointed to Gordhan’s undeniable influence in the creation of the provocative ‘SARS Rogue Unit’ and, coupled with his alleged half-truth regarding meeting the infamous Gupta family, would need to be punished by Ramaphosa within 30 days.

The Public Protector added that SAPS had been alerted to investigate the criminal conduct of Gordhan and Pillay “for violation of section 209 of the Constitution and section 3 of the National Strategic Intelligence Act”.

The @PublicProtector makes adverse findings against Pravin Gordhan on his lies to Parliament & establishment of an illegal intelligence unit. Let’s hope that President @CyrilRamaphosa will not comply with the remedial action. We as Parliament will act on areas that relate to us.

Shivambu immediately charged into the fray on social media, issuing a not-so-veiled threat to the President over his procrastination, saying:

“The Public Protector makes adverse findings against Pravin Gordhan on his lies to Parliament and establishment of an illegal intelligence unit. Let’s hope that President Cyril Ramaphosa will not comply with the remedial action. We as Parliament will act on areas that relate to us.”

The EFF’s Deputy President, clearly pointing to parliamentary motions of accountability, which, by vote, could see both Ramaphosa and Gordhan face harsh condemnation, added that the office of the Public Protector would not continue to be undermined, saying:

“She [Mkhwebane] said, ‘The book of Esther, Chapter 4, reads thus: “And so I will go to the King, which is against the law; and if I perish, I perish!’

Public Protector will not perish, and there are no Kings in a democratic Republic. We have fallible individuals who must be held accountable.”