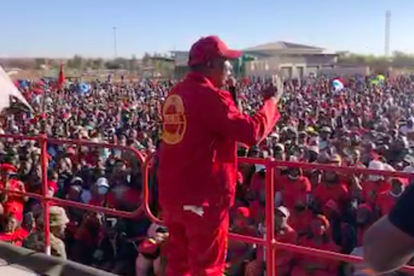 The Economic Freedom Fighters (EFF) rejected the judgment by the Constitutional Court to restore Afrikaans as a dual medium of instructor at the University of South Africa (UNISA).

“The judgment has huge implications to the 2016 similar decision by the University of Pretoria on dropping Afrikaans. Moreover, the court has ignored that there is a linkage between race and language in the content of the country’s history.

“Language is our heritage and is at the centre of identity and history – and as such, if Afrikaans is restored as a dual medium of instruction at UNISA, so should all South African universities introduce African languages as official languages of instruction, including Swahili.”

ALSO READ: EFF warned they ‘could be BARRED’ from contesting the 2021 Elections

Furthermore, the party said the selective choice of Afrikaans as a superior language perpetuates superiority over indigenous languages and is an insult to the standing Africans and their heritage of rich languages.

“In the grace period to 2023 determined by the court we call on UNISA to retrace its steps correctly and with lawful and procedural precision, do away with the 1976 language of national oppression, racial segregation, exclusion, and supremacy.”

Meanwhile, Afriforum has said the court ruling was a huge victory for Afrikaans and language rights.

“The ruling handed down by the Constitutional Court today in favour of AfriForum in the case for the retention of Afrikaans as a primary language of instruction at the University of South Africa (Unisa), is hailed by AfriForum as a huge victory for Afrikaans, Afrikaans-speaking students and language rights in South Africa in general.”

The case was heard by this court on 20 May 2021 and judgment was reserved. This followed after the Supreme Court of Appeal had ruled in favour of AfriForum on this issue with its judgment in 2020 that Unisa’s language policy had not been adopted “in a constitutionally compliant manner”.

“The Constitutional Court upheld the Supreme Court of Appeal’s finding that Unisa’s current language policy, which provides only for English as the primary medium of instruction, is unconstitutional but allowed more time for the implementation of the ruling. The full ruling is not yet available, but AfriForum has the greatest appreciation for the Constitutional Court’s position on students’ right to mother language education.”

According to Alana Bailey, AfriForum’s Head of Cultural Affairs, this judgment which followed after legal processes spanning more than five years, is of great importance to all Afrikaans-speaking students in the country, but also for the future of Afrikaans as a high-function language.

“This marks the beginning of a new chapter in the empowerment of all who are not first-language speakers of English in tertiary education. It is fair to say that private educational institutions have the freedom to offer education in any language of their choice, but to be used as the language of instruction at a tertiary institution is of great importance for the survival and continuous development of a language.

“Therefore, when any language is phased out at an institution, the decision has huge ramifications, and the decision cannot be readily accepted. The court today confirmed this point with the ruling and confirmed the right to access to Afrikaans mother-language education at both public and private institutions for students of all income groups,” Bailey adds.”