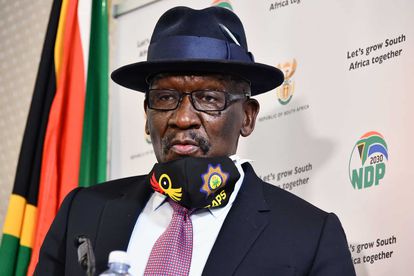 Now, this is what we call a proper political showdown. Mbuyiseni Ndlozi and Bheki Cele – two controversial politicians from opposing parties – are set for a legal battle in Pretoria, after the EFF Commissar revealed that he would be filing a set of criminal charges against the ANC Minister.

The details were confirmed via a statement issued on Sunday. It follows a turbulent month for the hat-donning politician, who has received criticism for his beach visits and curfew directives. The party communication explains the following…

So, why those two charges? Well, Ndlozi and the rest of the EFF’s hierarchy are upset with developments from the Gauteng North High Court. A recent ruling there revealed that Bheki Cele ‘tried to halt the suspension’ of a probe into the allegedly fraudulent acquisition of PPE. This, according to the Red Berets, is a gross abuse of power from the minister.

“Following the Gauteng North High Court Ruling which cited Minister of Police, Bheki Cele, as having tried to halt the suspension of Lt-Gen Peter Jacobs’ investigation into the fraudulent acquisition of PPEs in Crime Intelligence, Commissar Mbuyiseni Ndlozi will open a case of political interference and defeating the ends of justice.”

EFF statement on the filing of charges against Bheki Cele, the current serving police minister

Commissar @MbuyiseniNdlozi To Open A Case Against Minister Of Police Bheki Cele pic.twitter.com/yU9G77DAXm