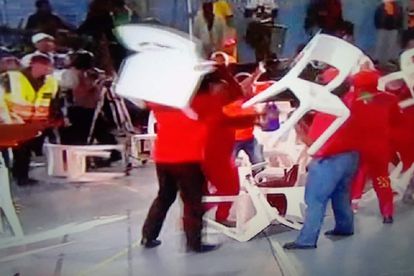 An election debate in Hout Bay, Cape Town descended into abject chaos on Friday as supporters of the EFF threw chairs and participated in a huge disruption during the televised exchange.

Residents of the coastal town gathered at the Hangberg Sports and Recreation Centre to voice their frustrations to respective regional political leaders, tackling topics ranging from land expropriation to unemployment and crime.

The mood in the hall was tense right from the start, peaking when the BLF addressed the crowd. Their protestations were met by heckling and shouting from the audience and it didn’t take long for the verbal confrontation to turn physical:

EFF throwing chairs for no reason and people of Hout bay have missed the opportunity to be heard. @EFFSouthAfrica @SABCNewsOnline pic.twitter.com/gmCNqbfhXB

Bonginkosi Madikizela was there as a representative for the DA, and he brandished those in red regalia as “hooligans” for their part in the violence. The provincial Western Cape leader also stated that the supporters continued to behave aggressively after the debate had been cancelled.

“The scuffle that ensued at the SABC Morning Live debate in Hout Bay this morning is a frightening reminder to South Africans that the EFF’s only response to the country’s issues is violence.”

“Sadly, the EFF has a track record of intolerance and violent behaviour at public meetings and today was no different. After the debate, they continued to intimidate supporters as they were trying to evacuate the hall. This is unacceptable and must urgently be condemned and addressed by the leadership of the EFF.”

Of course, there are two sides to every story. EFF sources say they were provoked by the newly-founded Land Party, claiming that their comrades had to act in self-defence once chairs were thrown towards them.

With just a month to go until the South African Elections of 2019, this is the type of conduct nobody wants to see. All 48 registered parties have signed an agreement with the IEC to behave in a more respectful manner. Somehow, we don’t think launching chairs across the room will be covered by their guidelines.