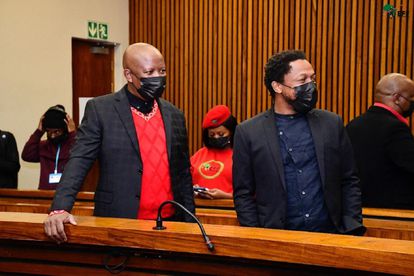 EFF MP Mbuyiseni Ndlozi is expected to testify before the Randburg Magistrates Court on Friday as the assault matter against him and leader Julius Malema resumes.

The two are accused of assaulting a senior police officer at the funeral of Winnie Madikizela-Mandela in April 2018.

The assault matter resumes after it was postponed in May for judgment. At their last appearance in May, the State was forced to close its case as its final witness did not pitch.

Instead, Ndlozi will be cross-examined on Friday, said AfriForum.

Ndlozi and Malema are both accused of assaulting Lieutenant Colonel Johannes Jacobus Venter at the funeral. The pair claimed Venter tried to stop them from entering the cemetery. The incident was caught on CCTV footage.

They pleaded not guilty to the assault and argue that Venter’s behaviour was unlawful. They also claimed they were acting in self-defence. The two had submitted a discharge application but it was dismissed by Magistrate Leland Poonsamy last month.

A discharge application is granted if evidence is not sufficient to prove the accused offence. This is in line with Section 174 of the Criminal Procedure Act.

Poonsamy found that the state had indeed submitted sufficient evidence to prove its case, including the CCTV footage.

While Malema and Ndlozi claimed they had a permit to enter the cemetery, Venter argued the permits were only for the family of Madikizela-Mandela, the president, his deputy and all accredited persons.

Despite video footage of the altercation, police failed to attend to Venter’s complaint, AfriForum says.

“The senior police officer laid a complaint with the police, but the police failed to attend to the complaint until AfriForum’s Private Prosecution Unit made enquiries into the investigation in January 2019,” said Duvenage.

ALSO READ: Ramaphosa should ‘pay back the R12m’ on farm theft probe – EFF