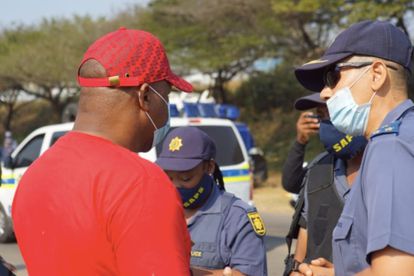 The Economic Freedom Fighters (EFF) March to Phoenix has indeed gone ahead on Thursday 5 August, however, the party said it’s clear that the police have taken a side. If you haven’t kept up to date with the latest developments, the EFF proposed a march to Phoenix in KZN following unrest in the province and the subsequent death of over 30 people in the area.

The red berets went as far as calling the march to Phoenix one that is “against racist Indians”. The EFF says Indians should pay for killing Black people during the unrest, all the while, Democratic Alliance (DA) leader John Steenhuisen says the red party is purposefully trying to stir up racial tensions and anti-Indian sentiment.

The party said EFF Secretary-General Marshall Dlamini arrived for the march to Phoenix around midday. Posting pictures of Dlamini in tense conversation with police, the party said SAPS have taken a side. Here’s why…

“The police have taken a side in support of the racist Indians as they deny Ground Forces access to the march; police have blocked the entrance in Phoenix,” the EFF said.

The party later reported that Dlamini was giving the line of march as they prepare to March to Phoenix police station to demand the immediate arrest of “racist criminals and thugs”.

“Despite the attainment of political freedom, Black people continue to be subjected to racism by institutions, right-wingers, and Indians in this country. Black life does not matter and is not valued in this country. That needs to come to an end NOW” the EFF said.

When The South African reached out to the Police Ministry for comment regarding the EFF’s claims, it declined to speak on the matter. We also reached out to police in the province for details of their operational plan, however, there was no comment on the matter at the time of publication.

Democratic Alliance (DA) member Dean Macpherson said the EFF march to Phoenix would be a disappointment for “race hustlers” and a victory for peace-loving people.

“Considering all the attention and continued whipping up of anti-Indian sentiment by politicians and the media, this is a rather pathetic crowd at the EFF march in Phoenix. This will be a real disappointment for all the race hustlers and a real victory for peace-loving people,” he said.

“I have today written to the Chairperson of the South African Human Rights Commission (SAHRC) asking him to intervene in the escalating race-baiting and racial scapegoating in KwaZulu-Natal in the wake of the unrest and looting, and specifically to take action against the organisers of a planned EFF march on 5 August aimed at whipping up anti-Indian sentiment,” said Steenhuisen.