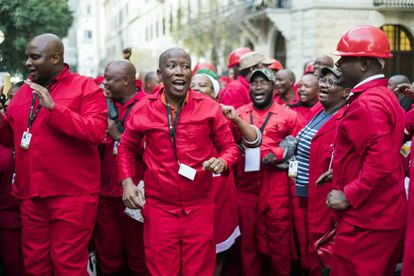 Economic Freedom Fighters leader Julius Malema has vowed that the party will protest outside the Pretoria high court on Tuesday when the first part of Public Enterprises Minister Pravin Gordhan’s court action against the Public Protector (PP) is heard.

“We are going to treat Jamnadas like a constitutional delinquent and anybody who does not like it can go home and have a nice cup of tea because there is nothing you can do about it,” Malema told a media briefing in Cape Town on Thursday, referring to the minister by his middle name.

“Line up, let’s meet on Tuesday, Jamnadas has taken (the) Public Protector to court and we are going to court and we will not be stopped by anyone…. No amount of intimidation can stop the EFF, we don’t listen to anyone, we listen to our voters.”

Malema guns for the SACP

Malema railed against the South African Communist Party (SACP) for earlier in the day expressing support for Gordhan. The SACP said it would lobby the National Assembly to launch a process of reviewing Mkhwebane’s fitness to hold office.

SACP spokesperson Alex Mashilo said the PP’s finding that the minister allowed the establishment of a “rogue” intelligence unit within the South African Revenue Service, was part of a campaign to undermine a concerted government drive against corruption.

Gauteng High Court Judge Pieter Meyer on Wednesday ruled that the existence of a “rogue” unit was unfounded and that the establishment of a SARS unit named the ‘High Risk Investigation Unit’ was lawful.

Mashilo said billions had been looted from government coffers in the state capture scandal, yet Mkhwebane suspiciously chose to focus on the discredited narrative of an illicit unit within the revenue service.

Malema countered that the SACP was a spent force and his party would pay them no heed.

“They have nothing to say to us. If they want to charge let them charge, but we will never be silent, we will never be pushed into a corner and be told what to say and what not to say. Let’s go to the streets and if you want a fight you will get it. We are not scared. You are looking for us, we are in Pretoria on Tuesday.”

Mkhwebane launched the probe into Gordhan after receiving a complaint from the EFF about the intelligence unit. Gordhan has maintained he did no wrong and has asked the court to suspend the implementation of her remedial action pending a full court review of her findings.