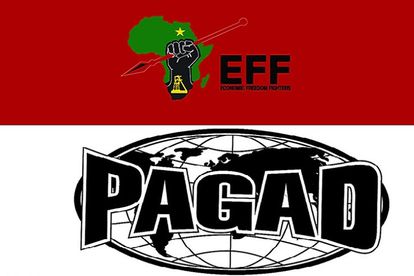 The Economic Freedom Fighters (EFF) in the Western Cape have announced an aggressive campaign against drug cartels, integrating local extremist group PAGAD into their fold as part of a new initiative, named – rather unfortunately – UFAGAD, the United Front Against Gangsterism and Drugs.

The two groups held a press conference together last week to declare their joint war on drugs, saying that they shared various mutual goals and that they were open to recruiting other factions dedicated to combatting drug crime and gangsterism into their new union as well.

However, they also made sure that their invitation would fall short of incorporating EFF’s political opponents, nor was there any mention of crimes committed by PAGAD members in the past. Instead, the new bedfellows vowed they would not fear gangsters working against their endeavours while devoting their new front to exposing the crimes of drug traffickers.

Islamist group PAGAD has been witnessing a resurgence lately following a long period of silence for almost a decade, most notably surfacing at local pro-Palestinian protests in Cape Town and holding events to renounce drug-related activities in the Cape Flats. Recently they came under suspicion of being linked to the explosion of two pipe bombs in Cape Town, but the police failed to establish a clear connection.

Pagad leader Abdus Salaam Ebrahim emphasised that PAGAD would continue to function as a social cause in its own right, stressing that the relationship between the two organisations would be continually examined.

The new movement is planning a series of marches against drugs, reportedly starting in the coming few weeks in Langa, Cape Town. Authorities are observing the resurgence of PAGAD in Cape Town and other extremist groups across South Africa with caution, especially after video uploaded last month in which a self-identified South African man lauded the actions of the terrorist groups Islamic State of Iraq and the Levant (ISIL or ISIS).