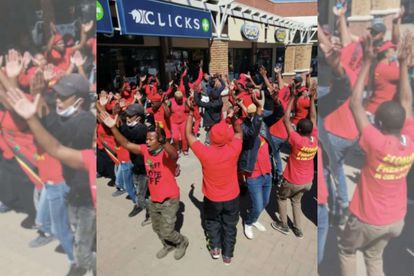 The Economic Freedom Fighters (EFF) have responded to a court interdict that was issued in favour of Clicks on Tuesday 8 September. The interdict essentially prohibits the party from causing disruptions to operations or intimidating staff or customers.

This comes after the EFF stormed multiple Clicks stores nationwide in protest of its offensive hair campaign which labelled black women’s hair as “dry, damaged and dull” and white women’s hair as “normal”.

During, what the EFF claims was peaceful protest, multiple stores were vandalised and two outlets in Mpumalanga and Limpopo were petrol bombed.

The party said its actions have been characterised by peaceful protest across all outlets.

“To voice dissatisfaction of the violence of racism in the form of a picket does not constitute violence,” it said.

“The EFF would like to categorically state that we have not engaged in or commissioned any violence against employees, customers or commercial operations of Clicks,” it added.

The party maintained that Clicks lost in its attempt to interdict the protest action of the EFF as the interdict issued by the court does not speak to the protests being undertaken by the party across the country.

“We reject the infiltration of our protests by agent provocateurs who wish to tarnish the good name and reputation of the EFF. These elements will be identified, isolated and dealt with severely,” it threatened.

PROTESTS TO CONTINUE UNTIL FRIDAY

The party said its interactions with customers and employees have been nothing but peaceful.

“We would like to advise all law enforcement agencies, be it private or the state, to read the court order carefully and appropriately to avoid infringing on our constitutional right to demonstrate,” it said.

“We will continue to protest across all Clicks outlets until 11 of September 2020,” it added.

The party said the protests will continue so that Clicks, “which values profits over the dignity of black people in this country feels the consequences of undermining the identity of black people, and presenting whiteness as the standard for beauty”.

The red berets said it should be clear to Clicks that the court has not declared the protests illegal and accordingly, the lawful and “peaceful protests” will continue until Friday.

“Accordingly, all members and ground forces of the EFF must intensify their efforts to ensure Clicks does not operate, and this must be done through peaceful means,” it added.