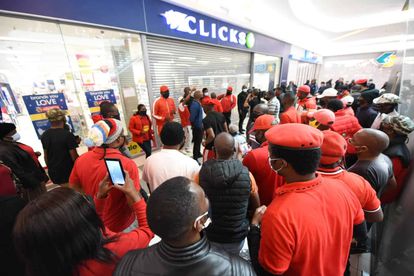 EFF leader Julius Malema addresses supporters at the Mall of the North in Polokwane on Monday. Photo: EFF

EFF leader Julius Malema addresses supporters at the Mall of the North in Polokwane on Monday. Photo: EFF

Two of South Africa’s opposition parties’ most charming members, the Democratic Alliance’s (DA’s) Natasha Mazzone and Economic Freedom Fighter’s (EFF’s) Mbuyiseni Ndlozi have started a bit of a Twitter war on Monday as havoc unfolds at Clicks stores around the country following protest action against a racist ad campaign.

It’s been a truly manic Monday filled with ugly scenes of vandalism, and the DA have said that they will lay charges of intent to incite violence against the EFF, with leader Julius Malema having insisted that his supporters do not need permission to engage in protest against what they have deemed to be unforgivable racism from South African corporations.

All that aside though, there’s a charming side plot developing between the “People’s Bae” Ndlozi and Mazzone after the latter spotted EFF deputy president Floyd Shivambu protesting in a swanky pair of Prada loafers.

Mazzone kicked off the exchange by zooming in on a picture of Shivambu as he led protests at a Clicks outlet at Sandton City in Gauteng on Monday morning, noting the irony behind a proclaimed revolutionary adoring Prada shoes to voice the grievances of the country’s disenfranchised.

“I will say this about Floyd, for a revolutionary, he has GREAT taste in shoes,” she said.

“These Prada loafers are my favourite! It’s just so much easier to protest in comfort (and style),” she said. “From protest to a snazzy lunch out with one removal of the beret. Forward thinking.”

Ndlozi then replied with the suggestion that Mazzone is harbouring a bizarre foot-related fetish for Shivambu.

“DA chief whip fantasising about Floyd’s foot. Zooming in, measuring, sizing and the in the end she says ‘forward thinking’,” he said. “Going forward, please, we must guard our DP around this white woman!”

If you were hoping that the strange back-and-forth ended there, I’ve got bad news for you.

“Awww, I was hoping you would pop in. How are you?” gushed Mazzone, adding that she would love to know when Ndlozi will next be making a public appearance.

“You know me. I LURVE PRADA, and Ferragamo,” she continued. “Why must you guard him? Certainly he isn’t scared of me, maybe you, but not him?”

Ndlozi clarified that he is, indeed, terrified of the DA Chief Whip, before digging deep into psychological theory with his rebuttal.

“Am VERY scared of you. You are an entire phobogenic object.”

What is a “phobogenic object”, you may be asking?

The phobic object, explains post-colonial theorist and philosopher Frantz Fanon, is “essentially that which arouses a sense of subjective insecurity within a person, that is, it incurs feelings of fear or dread.”

In keeping with this theme, the DA have also accused the EFF of arousing senses of fear and dread with their rhetoric around the protests engulfing the country today.

“We will lay charges of incitement to violence and destruction of property against the EFF and more especially it’s leadership as made public who would welcome rioters at certain malls,” he said.

‘Clicks anger warranted, but violence is not the answer’

Whitfield said that the anger around the controversial Clicks advert that suggested that black people’s hair is inferior or damaged compared to white people’s is certainly warranted, but said that tolerance must end when EFF leadership incites its supporters to violence.

“We recognise the upset and anger the Clicks advert has caused to many South Africans however the EFF’s violent response is unacceptable and SAPS has a duty to act against Julius Malema and others who have made explicit statements inciting EFF members to commit criminal acts,” he said.

“This is not the first time that Julius Malema and his quasi-revolutionaries have called for violence and the destruction of property in the name of justice.”

Whitfield said that the DA will be submitting evidence of the EFF’s violent behaviour and malicious destruction of property to SAPS and will put pressure on the National Police Commissioner “to ensure that Julius Malema and his thugs are not given special treatment”.

“The EFF claims to represent the interests of the marginalised and economically excluded, however whenever they organise protests mass destruction and violence follows in the wake,” he said.

“The EFF also never takes responsibility for the negative impact their actions have on the lives of vulnerable South Africans and those who they claim to represent. They much prefer to blame the inevitable fall-out on anyone or anything else.”