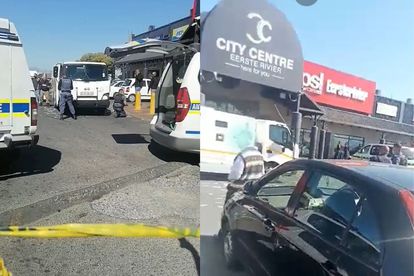 A shootout broke out at an Eerste River shopping centre on Tuesday, 3 May. Photo: Screenshot from video.

A shootout broke out at an Eerste River shopping centre on Tuesday, 3 May. Photo: Screenshot from video.

Four people, including a police officer, were shot and wounded in a shootout between a group of armed robbers and the South African Police Service (SAPS) in Eerste River, Cape Town on Tuesday, 3 May.

According to reports, unknown men allegedly entered the post office at the City Centre shopping centre and demanded cash.

“When the police officers arrived at the scene, a shootout between the suspects and the police followed,” said Swartbooi.

The four victims were taken to nearby hospitals for medical treatment, said Swartbooi.

The suspects fled the scene and are yet to be arrested.

The Kleinvlei police station is investigating cases of attempted murder, attack on the police and business robbery.