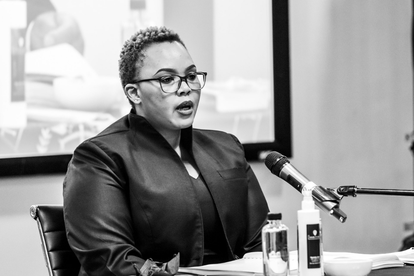 Judge President of the Supreme Court of Appeal, Mandisa Maya, asked Rusi about the claims during the interview.

“While working for the Legal Aid board you accessed and distributed pornographic material using your employer’s computers and disseminated that material among male candidates employed by the Legal Aid board. Instead of dealing with that issue when it was raised with you, you resigned on 24-hour notice,” Maya said in the commission.

Rusi replied to say she would not have attended the hearing if the claims were true.

“If there was any truth to these allegations, I would have spared myself the embarrassment of coming before this honourable commission,” she said.

According to Rusi, the computers at Legal Aid SA were oddly shared among colleagues rather than the usual one personal computer for each individual, as set up at other organisations.

The acting judge said there was one occasion when there was a complaint that some colleagues had private material on the computers, but nobody came to her to say it was one of the computers she had used.

“At Legal Aid SA, we shared computers. On my arrival, I found an open-plan set-up where anyone would use any computer at his or her convenience. There was a stage where the management of Legal Aid SA complained that practitioners and other staff members were using computers for private material,” said Rusi.

“When it was said that certain obscene material was discovered on one of the computers, I was never shown any such material and I had never been told that the private material belonged to me. So when I saw the objection, it was really difficult for me to even defend myself because I knew the set-up of Legal Aid SA at the time.

She was then questioned about why she left the company after a 24-hour notice rather than the one-month notice period that is stipulated in her contract. She said she had accepted a magistrate’s position at Mount Ayliff after the death of a magistrate. Rusi said her hasty departure was a norm from what was a toxic work environment at Legal Aid.

Meanwhile, the JSC will make its recommendations for the post. Rusi could be one of the five candidates who wil be named as the Eastern Cape’s high court judge in Mthatha.