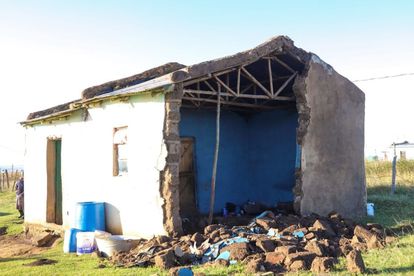 The flooding in the Eastern Cape has left more than 1 000 people without homes. Photo: @GCIS_ECape / Twitter

The flooding in the Eastern Cape has left more than 1 000 people without homes. Photo: @GCIS_ECape / Twitter

The Eastern Cape’s premier revealed the extent of the flood damage within the province. Alfred Nzo, Joe Gqabi, Chris Hani and OR Tambo districts are reportedly the hardest-hit areas.

Deaths and homelessness are a few issues faced by communities

A 10-year-old boy from the Ngxongweni village in Port St Johns is among the deceased. The child drowned while attempting to cross a flooded river. More than 1 000 people have been left without homes since the flooding.

Others faced damage to their properties by the adverse weather the Eastern Cape faced over the past few weeks. It was revealed that 55 villages are without water and electricity supply. This was attributed to infrastructure damage.

Just like KwaZulu-Natal, Eastern Cape students have been facing troubles. Around 10 schools were damaged due to the floods. Approximately 12 healthcare facilities also faced extensive damage.

Officials have expressed concerns about the damage agricultural infrastructure has faced. They are afraid that this will negatively impact 2022’s harvest and agricultural yields. This adds pressure to an already existing strain on food prices.

Schools, hospitals and roads have been damaged in the Eastern Cape

Around 170 roads have been destroyed. Most of these roads are in rural areas and have disconnected communities from towns and important services such as hospitals and schools.

An inter-ministerial committee is expected to visit the Eastern Cape within the next few days, reports EWN. Premier Oscar Mabuyane said they would be conducting assessments in the province to mobilise support for impacted communities.

Explainer: How to look out for and avoid health risks from floods

Juno Thomas and Linda Erasmus from the National Institute for Communicable Disease (NICD) have gone into detail about the health risks that could arise from flood disasters. South Africa experienced heavy rains which resulted in flooding in parts of the country. Hundreds of lives were lost in Durban while thousands of people were displaced.

The risk of waterborne and foodborne diseases is increased with the damage to or disruption of environmental health services and infrastructure. Overcrowding and displacement of persons are regarded as optimal conditions for respiratory and gastrointestinal illness outbreaks.

There are four main kinds of infections, namely: cutaneous, gastrointestinal, zoonotic or vector-borne and respiratory. Read the full story here.