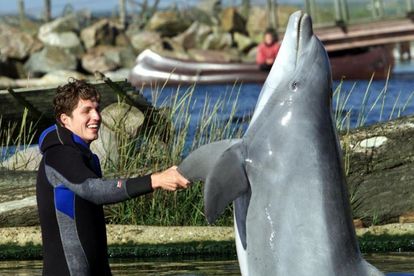 Conservation groups Sea Shepherd and the local House of Animals group dragged a Dutch dolphinarium before the Amsterdam Regional Court to stop the export to the Hainan Ocean Paradise, a theme park currently under construction in southern China.

“If you decide to export these animals to China, you are not looking after their welfare” the activists said on the House of Animals website, adding they will be used to entertain people “for commercial purposes”.

This was also because of the “stress of relocation, taking them out of a familiar environment and because the animals will now be someplace worse than they have been before,” the activists said.

The animal rights groups also opened a case against the Dutch government which authorised the transfer, saying it had a “duty to ensure” the welfare of the animals.

On Tuesday a judge granted an interim order to freeze the export until the case against the government – which had issued export permits – had been decided.

The judge “gave weight to the irreversibility of a possible transfer to China,” the Amsterdam Regional court said.

“The dolphinarium is therefore not allowed to use the export licenses until a decision has been made,” the court said.

A full hearing will be now held on 23 November in which judges were set to rule on the validity of the government’s export permits.

The Dolphinarium in the central Dutch town of Harderwijk is one of Europe’s largest marine parks and draws a million visitors every year since its opening in 1965.

Set up to educate the public about marine animals, it however has drawn criticism in recent years from animal rights activists who said the creatures were kept in confined spaces and made to perform for visitors.