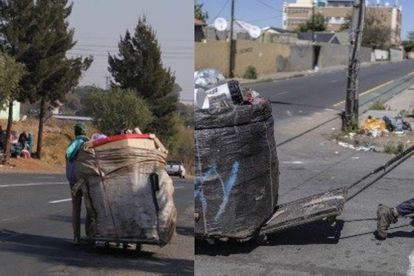 Dustbin diggers on the West Rand of Johannesburg have been accused of more than digging for recyclables in the area.

BCI Security, one of the prominent private security companies in the area of Roodepoort, has been observing the dustbin diggers’ behaviour lately which has extended beyond the norm.

The company warned its community on Facebook after an increasing number of criminal elements.

BCI: “Dustbin diggers also known as trolley people / Informal recyclers, and various other labels have become a common occurrence in our streets.
We have noticed that as a result of the increasing number of dustbin diggers which results in less recyclable items per person these people are tending to get involved in criminal activity”.

CRIME LINKED TO THE RECYCLERS IN ROODEPOORT

“In addition to this, it has also become clear that these people believe in the proverbial saying ‘the early bird catches the worm’.”

“BCI, therefore, urges clients and the broader community to not take dustbins out on the night prior to collection. This creates an opportunity for these people to commence walking the streets in search of dustbins at night as opposed to day time, this leads to barking dogs etc and in turn creates opportunity for criminal acts,” the company cautioned.

“Therefore please consider your safety and that of your neighbours by taking your dustbins out on the scheduled collection day,” BCI advised.

If this does not worry you, well, there is a new hijacking trend of residential properties in South Africa, common in Gauteng and the Western Cape.

Dominic Steyn, head of the corporate, commercial, tax, and litigation at Cowan-Harper-Madikizela Attorneys said the strategy of organised property hijacking syndicates is simple: force their way into occupied or vacant properties, forcibly evict tenants or owners, and put in place tenants of their choice.