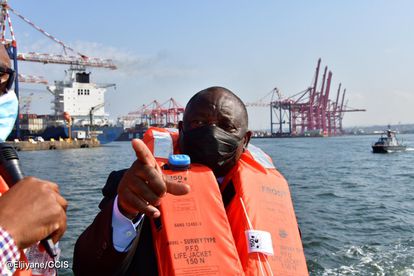 Durban Port is a “dream in the making” with its plans to invest R100 billion to develop the port, President Cyril Ramaphosa said during an oversight to visit to check on the progress made to alleviate container congestion on Thursday.

The aim of the visit was to ensure that the commitments made following the President’s meeting with concerned port users and business stakeholders in October 2019 had been implemented, the presidency said. State Owned Enterprises Minister Pravin Gordhan, KZN premier Sihle Zikalala and eThekwini mayor Mxolisi Kaunda accompanied the president along with Transnet senior managers and officials.

Ramaphosa told journalists that he had held a “very extensive meeting” with Transnet management and he walked away “elated” and “a very happy man” regarding the progress the port had made and its vision for the future.

“Earlier to this I had occasion to meet business people in Durban who had raised concerns about congestion here in the port as well as the inefficiencies. They were complaining that their goods were not travelling as quickly as they should and they were losing money and the waiting period was too long. We took this to heart,” Ramaphosa said.

He said he had on Thursday come to assess the measures Transnet had put in place to mitigate the congestion.

“What is more pleasing is they are making plans for the future. They are already looking at 2032 and putting forward a plan which is going to require R100 billion to invest and which will create up to 180 000 jobs in the intervening period,” Ramaphosa said.

He said Transnet had identified nodes that required expansion and areas for improvement in container and bulk cargo services.

“I walk away from my visit at Durban port extremely encouraged, elated. Durban Port is a national asset, it is the most important port in the economic architecture of our country. We want Durban Port to function. When Durban Port does not function it has a negative impact on trade and commerce on the whole nation…This is a dream in the making and it is going to be a success story so I walk away here a happy man,” he said.